Madam Rosmah Mansor showing her ink-stained finger after voting in Malaysia's general election in Pekan, Pahang, on May 9, 2018.

KUALA LUMPUR - Datin Seri Rosmah Mansor (pic) will have her day in court as she is set to stand trial for three counts of corruption involving hundreds of millions of ringgit relating to a solar hybrid project in Sarawak. A source said the prosecution will call about 25 witnesses in the trial, which is set to take place throughout February, March and April.

Rosmah, 69, was initially supposed to stand trial together with a former aide, Datuk Rizal Mansor, who was accused of abetting her.

However, in a surprising turn of events, Rizal was acquitted after the prosecution withdrew all four charges against him on Jan 8.

It is unclear at this point whether Rizal would be called as a prosecution witness to testify against the wife of the former prime minister.

Lead prosecutor Datuk Seri Gopal Sri Ram reportedly said the prosecution would decide on calling Rizal to the stand "as the case comes along".

According to the first charge, Rosmah was accused of soliciting for herself a RM187.5 million bribe from Jepak Holdings Sdn Bhd managing director Saidi Abang Samsudin, through Rizal.

The money was a reward for helping Jepak Holdings obtain a project, through direct negotiations with the Education Ministry, installing solar hybrid systems and the maintenance and operation of diesel generators for 369 rural schools in Sarawak. 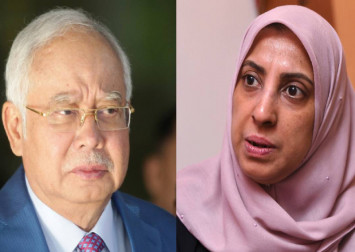 The project, known as "Project Bersepadu Sistem Solar Photovoltaic (PV) Hibrid", was valued at RM1.25 billion and RM187.5 million is 15 per cent of that amount.

In the second charge, she was accused of receiving RM1.5 million from Saidi as a reward for assisting Jepak Holdings obtain the same project.

The offence was allegedly committed at her house in Jalan Langgak Duta, Taman Duta, on Sept 7, 2018.

On April 10, 2019, Rosmah was charged again for allegedly receiving a bribe of RM5mil from Saidi through Rizal, for the same purpose.

Rosmah faces imprisonment up to 20 years and a fine of no less than five times the amount of gratification or RM10,000, whichever is higher, if convicted.