Sri Ram interjected that the person who was facing charges was not Najib but Rosmah.

However, Akberdin clarified that he needed to do so due to the prosecution's evidence, which contained materials related to Najib.

Later in the day, the court also heard that Tan Sri Dr Madinah Mohamad had once confided in Rosmah about her personal problems.

However, Akberdin's line of questioning prompted a heated exchange between the defence and the prosecution.

Sri Ram argued that Akberdin was revealing to the court too much detail on Madinah's personal life and that the details were not relevant to his questions.

Justice Mohamed Zaini then ruled for that line of questioning to be expunged as it revealed Madinah's personal details.

Another shouting match erupted when Sri Ram was questioning Madinah on Rizal Mansor's relationship to Rosmah.

Rizal is known to be Rosmah's special officer. 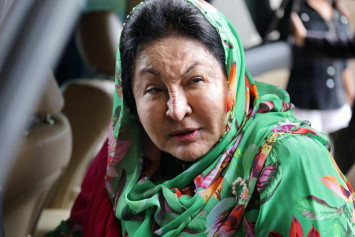 Akberdin then objected to Sri Ram's question, claiming that he was asking a leading question.

To this, Sri Ram objected.

This irked Sri Ram, who faced Jagjit and told him not to shout.

Sri Ram: Do not shout at me!

Jagjit: I am shouting because you yourself said that you are deaf.

Justice Mohamed Zaini broke the argument by telling them both to be civil in court.