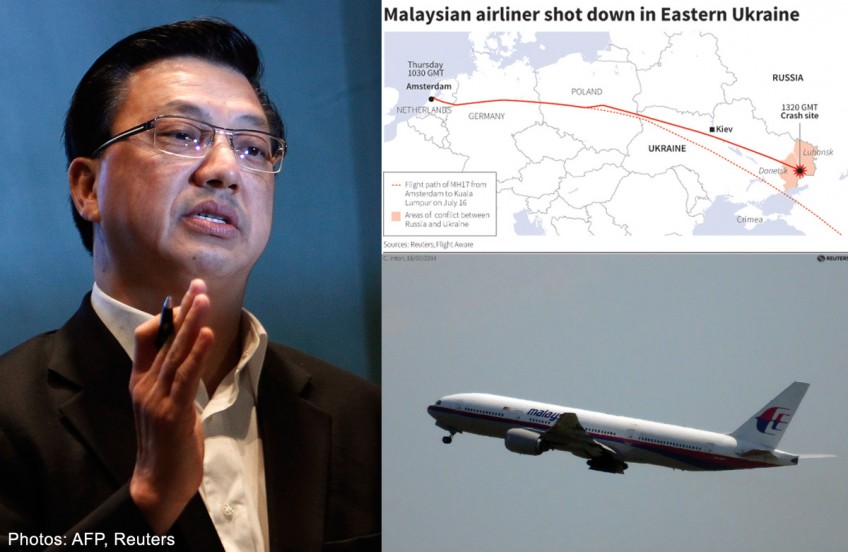 The Malaysian airliner was shot down over eastern Ukraine by pro-Russian militants on Thursday, killing all 295 people aboard, a Ukrainian interior ministry official said. Many of the passengers who died when a Malaysia Airlines plane crashed in Ukraine were heading to the 20th International AIDS Conference in Melbourne.

SEPANG - The route flown by the downed Malaysia Airlines (MAS) flight MH17 was one approved by the International Civil Aviation Authority (ICAO) and had been used by Malaysia Airlines for years, said Transport Minister Datuk Seri Liow Tiong Lai.

Liow, who spoke at a press conference at the Sama-Sama Hotel here on Friday denied that MAS had used the route to save on fuel costs.

"The route was an approved path that had been used for ten years by MAS and other aircraft, and 15 out of 16 Asia-Pacific countries use that route which has been determined by the ICAO. There was nothing informing us that the route should not be used. For many years, we have taken the same route and many other countries have also used the same route. In fact during that time, many other aircraft were using the same route," said Liow.

Asked if a terrible mistake has been made by allowing MH17 to pass over the Ukraine, Liow reiterated this route was an ICAO approved route and had received no notice not to use the route by the ICAO.

He repeated this when asked if he would take any responsibility for putting the lives of passengers at risk and for the deaths that occurred.

In a press release, Liow said there were no last-minute instructions given to the pilots to change the route of the flight.

He added that Malaysia Airlines had also released a statement on the aircraft's service record, which showed a clean bill of health.

MH17 disappeared from radar screens in eastern Ukraine at around 1415 GMT on Thursday, hours after the Boeing 777, bound for Kuala Lumpur, had taken off from Amsterdam's Schiphol airport.

It is believed to have been shot down 50km from the Ukraine-Russia border.

All 298 passengers and crew on board, including 43 Malaysians, are believed to have perished.