In a photo taken on May 21, 2019, Transport Minister Khaw Boon Wan (left) and his Malaysian counterpart Anthony Loke is seen looking at an aerial shot of the Rapid Transit System Link site in Woodlands North.

JOHOR BARU - Malaysia will announce its position on the Rapid Transit System (RTS) Link by the end of this month, in keeping with the timeline agreed upon with Singapore.

Transport Minister Anthony Loke said the announcement by Finance Minister Lim Guan Eng during the tabling of Budget 2020 showed the government's commitment to the 4km cross-border MRT link from Woodlands in Singapore to Bukit Chagar here.

"We are committed to meeting the Oct 31 deadline, " he said after officiating Johor Port Week 2019 here yesterday, adding that he would suggest to his Singapore counterpart, Khaw Boon Wan, to make the announcement here.

He said the matter had to be brought to the Cabinet first within the next "one or two weeks".

The agreement outlines aspects such as technical, safety and security requirements, commercial, financing, procurement and regulatory frameworks and customs, immigration and quarantine arrangements. 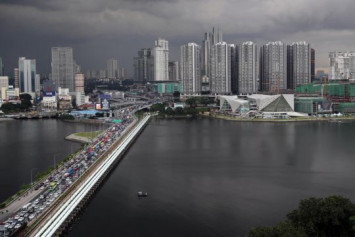 The RTS Link will be able to carry 10,000 passengers per hour per direction, translating to an additional capacity of 60,000 users crossing the Causeway during peak hours.

But the project has been stalled since the change of government following the 14th General Election in Malaysia, with Pakatan Harapan wanting to reduce the project's cost.

In March, Malaysia sought a six-month extension to respond to Singapore on issues regarding the project. The latter agreed to Sept 30.

In May, Singapore and Malaysia agreed to suspend work on the project until Sept 30.

More recently, Malaysia asked for the deadline to be pushed to Oct 31.

Sources said there were no financial implications on Malaysia with the extra time granted, but only for this time.

"If any further extension is sought, Singapore will reserve the right to make backdated claims for damages after work on the project was suspended, '' said a source.