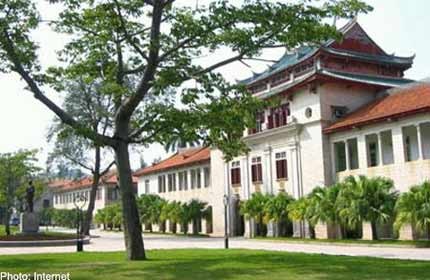 KUALA LUMPUR - Xiamen University – China’s first university to be set up outside that country – received a boon with a RM100 million (S$39 million) donation by local tycoon Tan Sri Robert Kuok for its campus in Malaysia.

Kuok, based in Hong Kong, gave the money to build a university library, which will be part of the main building.

This was announced by Tan Sri Ong Ka Ting, the Prime Minister’s special envoy to China, during a luncheon attended by President Xi Jinping here yesterday.

Present were Kuok, businessmen and representatives from non-governmental organisations.

The Malaysian campus of the Chinese university will be built in Salak Tinggi, about 16km from the KL International Airport in Sepang.

It is expected to be operational in September 2015.

“While Chinese education is well protected here in Malaysia, the Chinese community here mingle with other races and live in harmony,” said Ong.

Xi, in his speech, said the Chinese diaspora in most countries were successful.

He joked that some China nationals thought that Malaysian singer Fish Leong was from China.

“We have 40 years in strong diplomatic ties with Malaysia and I hope this will last,” he said.

Speaking to reporters later, Ong said Xi told him that he and his wife Peng Liyuan tried durians on Thursday night and enjoyed it.

Ong said this was Xi’s second visit to Malaysia after visiting Sibu, Sarawak, 20 years ago.