KOTA KINABALU - The carrying capacity to the five islands under Tunku Abdul Rahman Park (TARP) here will be capped due to overcrowding, as proposals to "facelift" the islands are also being considered.

Sabah Parks director Dr Jamili Nais said that at present the numbers can reach up to 2,000 visitors per day, with an average of 400 to 500 visitors per island.

"We are going to limit the numbers but that can only be done once we go online to sell entrance tickets.

"We have yet to discuss the exact figure but a study has been done according to the space available, the facilities and the volume of clean water. 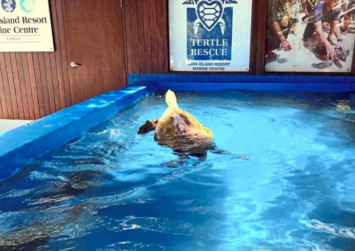 "The first step is to call up representatives from the tourism community including Malaysian Association of Tour and Travel Agents (MATTA) and Sabah Association of Tour and Travel Agents (SATTA); we will come up with a figure to bring to the Sabah Parks board and eventually to the Sabah Tourism, Culture and Environment Minister Datuk Christina Liew," he told reporters Friday (June 14).

Jamili said this after briefing Liew and ministry officials on the cleanliness status and toilet facilities during a visit to Pulau Sapi, Pulau Mamutik and Pulau Manukan in the TARP on Friday.

The other two islands under TARP are Pulau Gaya and Pulau Sulug.

Liew wanted to visit following complaints of high entrance fees that were unreasonable as the facilities were worn out and dilapidated, as well as dirty.

"The cleanliness challenge was also due to overcrowding, besides garbage washed ashore from the mainland and nearby islands.

"Sabah Parks have increased its manpower to do beach clean-ups every morning before tourists arrive.

"As for complaints on the toilet facilities, they were referring to temporary structures we put up while awaiting toilet upgrading in stages.

"The toilet renovations have been completed at these three islands, which are frequented by international tourists," Jamili added.

Meanwhile, Liew expressed satisfaction at her visit and said the facilities were up at par.

She said the state government has received several proposals to develop the islands under TARP, as well as some islands in Sandakan and Semporna, which will see improved facilities that will spur the tourism industry.

"There are private sector operators interested to come in with new chalets, jetties and facilities, the conceptual plans are there but we are not at liberty to reveal them yet.

"We are looking into it but there will be new developments coming and you will see changes in 10 years. There will be a facelift.

"We will still make it affordable for locals to visit. These companies will also have to comply with many things including the Environmental Impact Assessment (EIA) report to ensure minimal degradation," she stressed, adding that the proposals are mostly from Malaysian companies.