Sabah clamps down on 'vaping' candies amid growing fears

KOTA KINABALU - Authorities in Sabah have initiated action against sellers of vape-like candies named "ghost smoke" in Sabah amid growing concern by parents over the controversial sweets.

On Monday, the Sabah Health Department confiscated some 700 of the candies in towns across Sabah for labelling offences under the Food Act 1983. The packaging on the sweets lacked information explaining the product contents or its additives, which is an offence under the Act.

Yesterday, Sabah Domestic Trade and Consumer Af­­fairs Ministry of­ficers inspected shops around Pe­­nam­pang and se­­ve­­ral other areas but no sweets were found being sold.

State director Georgie Abas said the crack down would also be carried out in Papar and other parts of the state where complaints were received.

Parents voiced their concerns after a video clip showed schoolchildren believed to be in Papar eating the candy and emitting smoke from their mouths.

The candy is consumed by sucking on a straw to pro­duce a smoke-like effect, resembling a vape.

Meanwhile, schools in Sabah have been alerted about the sales of such candies and were urged to monitor their students.

Sabah Education Department di­­rector Mistirine Radin said a circular from the Sabah Health Depart­ment have been issued to schools in Papar district.

"However, our jurisdiction lies within the school grounds, so we will ensure that our school canteens do not sell these types of food," she said.

She also urged parents in other districts to keep tabs on their children and stop them from buying the candies.

Deputy Chief Minister Datuk Seri Madius Tangau said apart from Papar, the candies were also being sold in his constituency of Tuaran.

"Although we do not know its health implications, it is wise to ban these candies," he said.

In Johor Baru, the state Domestic Trade and Consumer Affairs Minis­try is also on the lookout for the candy. 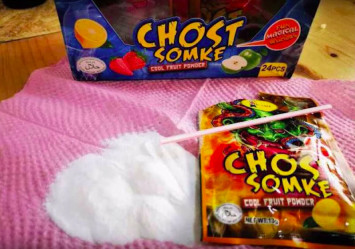 "We have yet to receive any complaints on the sale of the 'ghost smoke' candy here in Johor.

"We are, however, checking if these candies are being sold," said the ministry's state director Mohd Hairul Anuar Bohro.

"We have not received any information on the sale of these candy in Johor, but we need to investigate whether it causes any health hazard as well as identifying shops that are selling them," he said.

It was reported that the Health Ministry's Food Safety and Quality Division has begun an investigation into the candy.