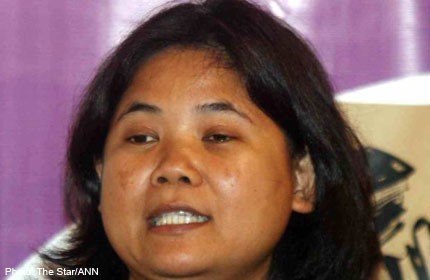 PETALING JAYA - He should be sacked, a women's rights advocate said of the parliamentary officer who made the "flash your panties" remark.

"Why do some men think that women have to exploit her sexuality in order to succeed.

"Do men think that women can't succeed based on their intelligence, strength and merits.

"Women can! I find that to be a very sexist remark!" Norhayati Kaprawi, who is also a documentary filmmaker, told The Star Online.

Norhayati was referring to the statement Fuziah made during her debate in Parliament that the officer reportedly told a female MP that if she had shown her seluar dalam, she would have gotten the post of state executive councillor.

The officer's remark drew the ire of many women rights activists who called it sexist. Norhayati also weighed in on the remark by PAS Muslimat chief Siti Zailah Mohd Yusoff who urged the Women, Family, and Community Development Ministry to introduce a dress code to help prevent sexual harassment.

Norhayati said if such was the attitude of PAS, then Malaysians, especially Malaysian women, should be worried.

"As in many countries that want to project their 'Islamic identities', one of the first things they impose is to regulate women's lives, on how they dress, and curb women's freedom of movement.

"I thought these last few years PAS has also been talking about human rights, freedom of speech, freedom of expression and all?

"Or is it just a political strategy, or do they mean that human rights, freedom of expression, freedom of speech are only for PAS people but not for others?

Rather than blaming the women, PAS women should ask their party leaders to teach men to respect women, to teach them that no woman deserved to be harassed, molested or raped," said Norhayati.

Wanita MCA Chairman Datuk Yu Chok Tow didn't mince her words in weighing in on the issue. "I find it hard to believe that a woman elected representative is blaming indecent attire for sexual assault and rape instead of condemning the perpetrators."

"The suggestion that the government should enforce laws on dress etiquette for women in public places is not the proper solution. This suggestion is not only absurd, but it also displays PAS' conservative mentality towards women."

"Wanita MCA urges all women MPs, including those from the opposition, to condemn this suggestion by PAS. Since DAP has been constantly defending PAS by telling the public that they have become more moderate, it is thus necessary for them to be seen speaking out against this regressive suggestion."

"As a fellow woman, Siti Zailah has a greater obligation to speak up for women's rights instead of making excuses for sexual perpetrators by putting the blame on women."

"By blaming a woman's attire as the reason for sexual harassment or rape, it shows that her mentality is remarkably similar to that of a male chauvinist," said Yu.

"Unfortunately, the first response would be - How to change the behaviour of the women?" she said, pointing out that politicians should have a better understanding of sexual crimes.

"These crimes are committed when the man has complete control over the women and they are unable to do anything to control that," she said, adding that rape occurs irrespective of the women's attire.

"Let's not turn our attention to women. If man can't control himself when he sees a woman dressing indecently, then it's an insult to man," she added.