In a post on her personal Facebook page on Sunday (Dec 2), she shared a reminder of the warm friendship her family has had over the years with four Malaysian Indian men.

She credited the family doctors Subrahmanyam Balan and N. Singaraveloo, as they "were part of the medical team who helped look after my late son, Tunku Abdul Jalil Sultan Ibrahim while he was undergoing cancer treatment".

Raja Zarith shared: "When Jalil was diagnosed with liver cancer, it was these two doctors with whom we - and Jalil - were most comfortable.

"Because Jalil was used to seeing both doctors come in and out of our home to treat us from the time he was little, theirs were familiar, friendly faces. And he had come to trust them.

"When Jalil took his last breath, it was Datuk Balan who looked at the clock and confirmed the time of his death."

When her eldest son, Tunku Mahkota Johor Tunku Ismail Sultan Ibrahim, was just a year old, another man, Mohan, looked after him while she and the Sultan were waterskiing at Stulang Laut.

She said that Mohan taught her children how to swim, and whenever the children wanted to go swimming, he would look after them, even being in the water for hours. 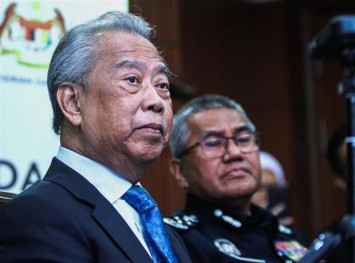 "He's been their swimming coach, their playmate and their 'nanny'," she wrote, adding that Mohan would also "stay at our house because I was frightened of being in a house of just children and women (my maids)".

A burnt car at the Sri Maha Mariamman temple in Subang Jaya, Selangor, on Nov 26, 2018, following scuffles involving some 50 men.

Raja Zarith shared that she trusted Mohan with her life and her children's lives. He was dedicated to the point that he would not sleep until the other staff had come in to work in the morning, she said.

Datuk Sugumaran was honest and sincere, she said, having proven and shown his love and loyalty to her husband, although he was often yelled at.

He was also her youngest son's companion and personally helped him while on holiday in England in 2009.

Raja Zarith believed these four men deserved mention and a "thousand thank-yous from the family".

She also shared several photos of the men with the royal family members in the post.