The incumbent Gabungan Parti Sarawak (GPS) coalition is likely to retain control of Sarawak in state elections to be held on Dec 18, analysts believe, in what would be a boost for Malaysian Prime Minister Ismail Sabri Yaakob.

The coalition is an ally of the federal government headed by Ismail Sabri, and is expected to comfortably beat the opposition, led by Anwar Ibrahim , which is in disarray.

The Election Commission said that by the time nominations closed on Monday, 349 candidates had been registered to contest the 82 seats in the Sarawak state assembly on Borneo island. The state has 1.25 million registered voters.

The Sarawak polls were initially slated to be held earlier this year upon the expiry of the state legislature’s tenure in June, but were postponed due to a January-to-August nationwide emergency aimed at dealing with the Covid-19 crisis.

The impending vote is the second statewide election being held since Ismail Sabri assumed power in August. His ruling alliance staged a decisive victory in elections in the state of Melaka on Nov 20.

“GPS is likely to sweep most of the seats in Sarawak. This is mainly because over the years it has come to dominate almost every aspect of Sarawak’s polity and economy,” said Oh Ei Sun, senior fellow at the Singapore Institute of International Affairs.

The GPS coalition won 72 of Sarawak’s seats in 2016, but this went down to 67 seats after one of the coalition members pulled out.

“Voting for GPS or not is not only a simple question of political preference, but also an unenviable choice between often impoverished defiance and some semblance of development, especially in the vast rural and remote regions,” Oh said.

Sarawak is the third poorest state in Malaysia and large parts of it remain rural and underdeveloped.

Sarawak’s landscapes range from swamplands around the coast, to riverine plains and extensive mountain ranges covered in dense rainforest.

Oh said only residents in more developed urban centres could afford to vote for the opposition.

James Chin, professor of Asian Studies at the University of Tasmania, said GPS would be at an advantage as it needed only a small percentage of votes to win under the first-past-the-post system.

GPS also had “almost unlimited resources” to campaign across the state and to reach rural areas.

“GPS has the logistics for all the rural areas, they can use helicopters to visit and campaign,” said Chin, who is from Sarawak.

“The opposition has no helicopters. With helicopters, you can do ad hoc campaigning, you can hop from one longhouse to the next,” China added, referring to the traditional homes of Sarawak’s indigenous people.

“On a normal day, if you start at sunrise, you can visit six or seven longhouses in one day. For the opposition, if you have to use long boats, the maximum they can do is three houses a day. Normally it’s just two,” Chin said.

The biggest concern for Sarawakian voters were bread and butter issues, Chin said, adding that, “Personality counts here in Sarawak.”

Azmi Hassan, a political analyst at University of Technology Malaysia, expected GPS to win as many seats as it won in 2016 and possibly add “one to two more”.

“If GPS wins big, [takes] 72 seats and forms the next government, GPS support for the federal government will be maintained,” Azmi said.

“This will be good news for PM Ismail Sabri.” 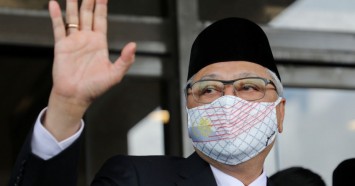 The opposition in Sarawak controls 13 seats. It comprises Parti Sarawak Bersatu, with six seats, and the Pakatan Harapan coalition led by Anwar, with seven seats. Two seats are currently vacant.

Analysts expect Pakatan Harapan to lose some of the seats it won in 2016 due to divisions that have emerged in the coalition since then.

“DAP will do very well in places where there are a high percentage of Chinese voters. But even then, DAP is under pressure now because there’s an undercurrent in the Chinese community against DAP.

“Nevertheless, I expect DAP to win some seats. They may not be able to win all the seats they won the last time round,” Chin said.

Anwar’s own party, the People’s Justice Party (PKR), has been unable to appoint a leader for the Sarawak poll.

Said Chin, “That is the failure of his leadership.”

In recent years, voices calling for a referendum or a breaking away from federal rule have emerged in Sarawak over what some people perceive as unfair sharing of wealth between the state and federal governments.

Parti Bumi Kenyalang (PBK) has openly campaigned for breaking away from federal rule. It fielded about 20 candidates in 2016 but failed to win a single seat.

Despite its losses in 2016, the party is fielding 73 candidates this time around.

China expected the party’s impact would remain limited this time around.

“But I expect them to do a lot better in terms of getting votes simply because they are putting up more candidates,” Chin said.