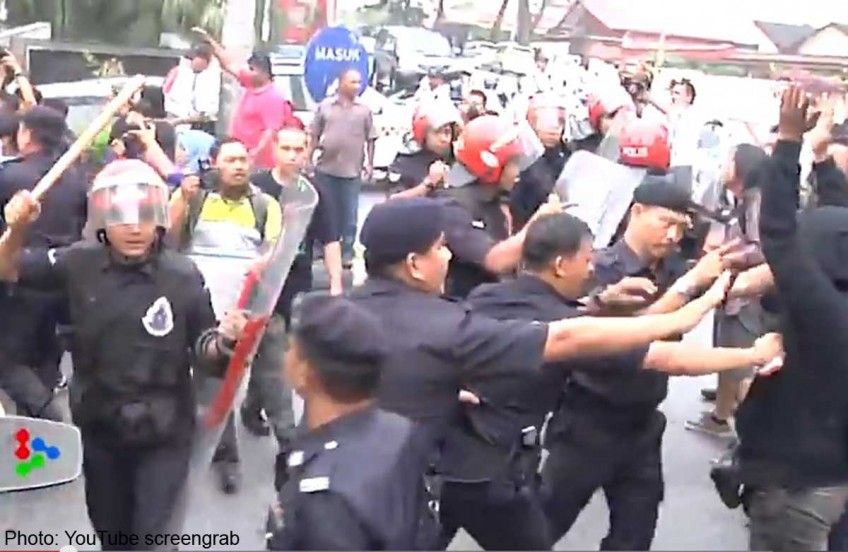 PETALING JAYA - An attempt to forward 106 questions at an anti-GST rally to the Customs Department office here ended in the arrests of the people who were involved.

The Gabungan Bantah GST group, a coalition of various NGOs and opposition parties had walked into the department's office around 11am yesterday with the list of questions concerning the GST.

However, the group was barred from moving further by heavy police presence and was restricted from having a sit-in at the lobby.

At around 5pm, police Light Strike Force (LSF) unit arrested almost everyone in the crowd after the protestors refused to heed the warning to disperse.

PSM central committee member and Sungai Siput MP Dr D. Michael Jeyakumar said the group had compiled the list of questions and would not leave until they were answered.

"We want the Customs director-general to answer these questions.

"If he cannot answer them, then that means they (Customs) are not ready and GST should be postponed," he told reporters at the rally.

The group managed to hand over the list of questions to a Customs official. Later attempts to get answers were unsuccessful as the crowd was restricted from moving into the building.

PAS Kuala Krai MP Dr Hatta Ramli said that it is was disappointing that the people were being barred from getting answers from public servants.

Members of the public who came to the Customs headquarters to conduct their business were left bemused as the counters were closed due to the rally.

CK Chong, an accountant, who had driven from Ipoh for his business was told, like many others, that he had to come back the next day.