In a statement on Wednesday (Dec 19), Umno Supreme Council member Lokman Noor Adam said he was disappointed at Ahmad Zahid's decision on Tuesday to step aside and hand over presidential duties to his deputy, calling the move a "victory" for Prime Minister Mahathir Mohamad.

"In such a critical situation, Umno needs the services of an experienced leader who is respected by BN MPs who have not jumped (ship), as well as those who have jumped," Datuk Lokman said, referring to former ruling coalition Barisan Nasional. 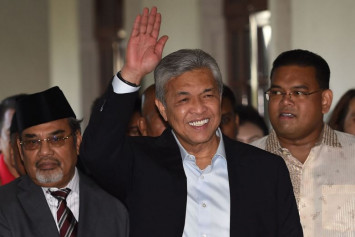 Ahmad Zahid decided to step down following weeks of mounting pressure for him to resign amid an exodus of elected representatives, leaders and party members from the party. The former deputy prime minister is also facing a total of 46 criminal charges, including for graft and money-laundering involving millions of ringgit.

Ahmad Zahid said he made the decision to go on leave because "Umno has to be saved from collapse".

Najib stepped down as Umno president days after BN was defeated in the May general election. He too faces dozens of criminal charges for corruption, criminal breach of trust and money-laundering, linked to troubled state fund 1Malaysia Development Berhad (1MDB).

Mr Lokman said Najib's appointment as de facto leader was crucial to ensure Umno's stability, as more than half of Umno members who voted for Ahmad Zahid as president would not accept the leadership of deputy president Mohamad Hasan.

He said Datuk Seri Mohamad Hasan had never defended Ahmad Zahid when the latter was attacked by those pressuring him to step down.