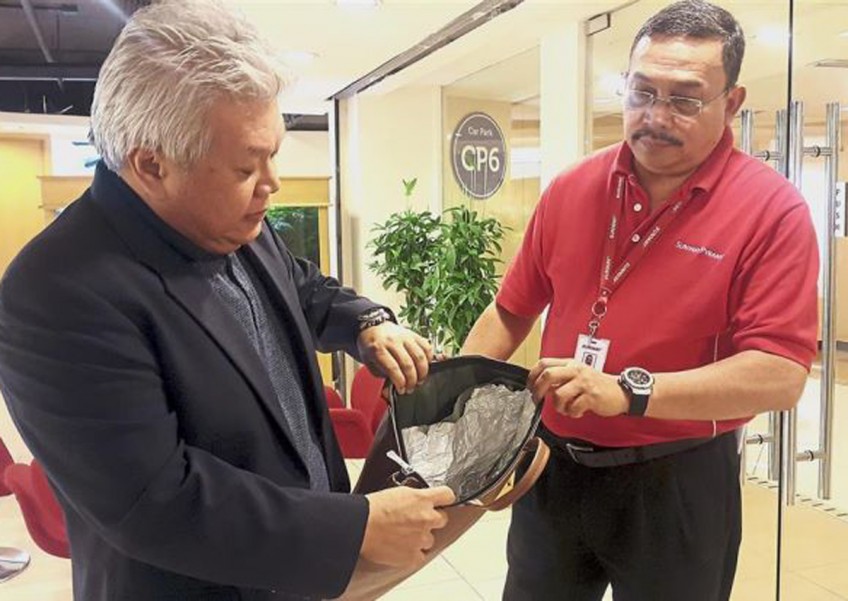 Stealth shopping: Tan (left) and Kapt Adnan inspecting one of the bags lined with aluminium foil that was seized recently.
The Star/Asia News Network

PETALING JAYA - Shoplifters have become creative with special bags lined with aluminium foil to avoid detection at the cash counter.

The bag looks ordinary on the outside but its aluminium foil lining gives it "special powers" as the bag can pass through the anti-theft detector without setting it off.

This means people can pick up items, put them in the aluminium foil-lined bag and then just walk out without paying.

With Selangor having enforced a "no plastic" ruling at malls, many shoppers come with their own bags to carry their shopping items.

At least two popular shopping malls have been hit by these aluminium foil-lined bag shoplifters.

"There is a lot of good in the no-plastic-bag ruling but people are also taking advantage of this. They come prepared with their own bags so there is a greater chance of people using these lined bags to shoplift.

"And it is not just bags. Some line their jackets and jeans pockets with aluminium foil so they can shoplift undetected. So we are even more vigilant," he said.

Tan said Sunway Pyramid received about three million visitors each month, which added up to 36 million people a year.

He said during peak tourist periods, international syndicates from as far as South America come in to hit multiple malls around the same time.

"When one person gets caught they all disappear," he said, adding that malls co-operated and shared information on this.

"Previously, shoplifters made the bag on their own. But now the bags are made in Vietnam and you can't tell that it has been lined with aluminium foil. We can only detect these shoplifters through their behaviour," he said.

"That is what our plainclothes store detectives are on the lookout for."

He said of the three shoplifters caught, two were from Vietnam and Myanmar, while the third was a local.

Kapt Adnan said each of them shoplifted clothes worth about RM3,000, adding that a syndicate could be involved.

Another mall hit by aluminium foil-lined bag shoplifters also found that the target was clothes. The shoplifters were well-dressed women from Vietnam and Myanmar.

Tan said shoplifting was bound to continue and every new measure put in would be countered.

He said security within malls itself was not a problem.

''We have 350 CCTVs in this (Sunway) mall. We have security patrols, and plainclothes detectives going around.

"We have a pondok police and tourist police nearby. And we escort those who don't feel safe to walk to their cars, especially at night," he added.