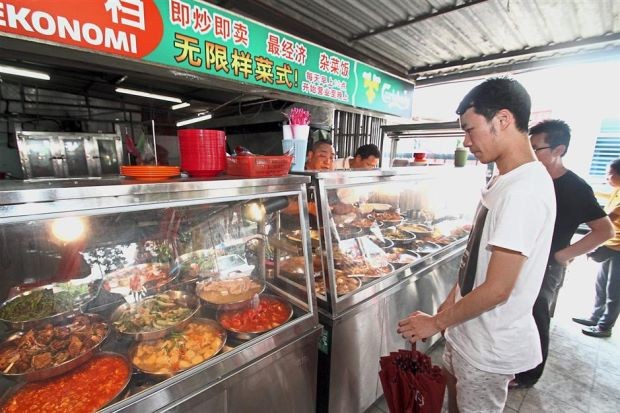 IPOH - An economy rice seller is giving out free meals to those who cast their votes today, regardless of who they vote for.

Tang Zhao Ming, 25, who runs his stall at the Kin Fatt food court in Jalan Sultan, Pasir Pinji, said his business would be closed for a day to offer free meals from 10am onwards.

"Each visitor will be entitled to a meal consisting of any three dishes of their choice with a glass of Chinese tea or plain water on the house.

"The offer is only for dine-in and no take-away is allowed," he said when met at his stall.

He said diners must show the indelible ink on their fingers as proof that they have voted.

Tan, who learned to cook at the age of 12, said the idea of offering free meals to voters was mooted by him and his partner, Yang Ka Mong, 54, to encourage people, especially those working outstation, to come home and vote.

"When we were placing orders for material and ingredients for this free meal offer, our suppliers also wanted to join in and they will be sponsoring rice, vegetables, chicken and meat.

"Some of our friends who learned about what we will be doing on polling day also volunteered to help us with cleaning and clearing at the food court.

"It is really heart-warming to see such support," he said.

Tan, who lives in Pasir Pinji with his wife and three children, estimated that some 2,000 portions of meals would be given away today.

"I will start cooking at about 8am before heading to Bercham to cast my vote.

"Then I will come back to the food court and continue cooking to top up dishes that have run out.

"The top-up will go on until everything has been used," he said, adding that his staff would be taking turns to exercise their right to vote throughout the afternoon.

Asked if he was concerned that there would be a sudden surge of people at his food court, Tan, who is the sole cook, said he was confident of feeding everyone who came as he had the experience of preparing food for huge crowds.

"Malaysians have come up with various efforts on social media to help other Malay­sians to travel back to their homes to vote on May 9.

"This is our way of doing our part in this elections," he said, adding that his staff would be looking out for the ink marks on the voters' fingers before they get to enjoy a free meal.