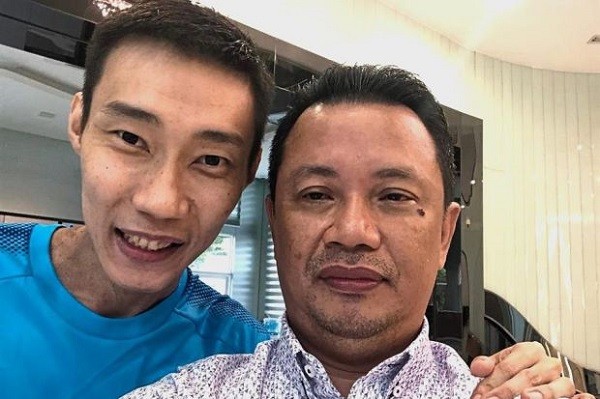 Looking smashing: Lee posing together with Norza after returning from Taiwan where he uderwent treatment for cancer.
The Star/Asia News Network

PETALING JAYA - Some four days after returning from Taiwan where he had been undergoing cancer treatment, badminton ace Datuk Seri Lee Chong Wei appears to be recovering well and in a jovial mood.

"He is a true fighter. I am super happy that he is recovering well.

He said Lee, who was in Taiwan for two months, needed at least another two to three weeks of rest.

"We spoke about his treatment which he had to endure, the chemo and proton therapy and also the performance of our badminton squad," said Norza, adding that Lee was happy with fellow shuttler Lee Zii Jia's win at the Taiwan Open.

On Sunday, the 35-year-old had returned home in a charter flight, landing at the Sultan Abdul Aziz Airport in Subang at 9.15pm.

Lee had been absent from training for two weeks in July, which BAM said was due to him being diagnosed with a respiratory-rela­ted disease.

BAM later announced that he was suffering from nasal cancer after speculation about his disease went viral on social media.

Lee had earlier pulled out from the World Championships in Nanjing and the Asian Games in July and August after suspecting something was amiss following a semi-final exit at the Indonesian Open in Jakarta.

Prior to the Indonesian Open, he was in smashing form when he upstaged hotshot Kento Momota of Japan en route to winning his 12th Malaysian Open title.