Sick turtle in Sabah sent to rescue centre by cab

The turtle was seen floating at Sabah's northern tip of Simpang Mengayau in Kudat about 200km from the state capital.

Resort operators and workers helped rescue it before seeking help from the wildlife department. They pooled their money to pay for the taxi.

Wildlife Rescue Unit director Dr Sen Nathan, along with other personnel from the unit, were on hand to pick up the sick turtle in the state capital and transport it to the centre operated by a resort on the island. 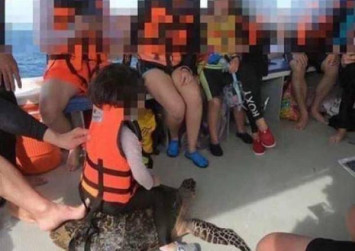 Floater syndrome prevents the marine animal from diving to feed and leaving it vulnerable to predators. Ingesting plastic is among causes of the condition.