He said this as he reminded a Johor lawmaker, who raised the issue when debating Budget 2020 in Parliament yesterday.

Datuk Seri Dr Edmund Santhara (PH-Segamat) requested the government not to impose high water tariffs on Johor when the new rates were finalised.

"Johor is already paying the highest water tariff of almost RM1.10 (S$0.36). If there is a hike, then at least make it on par with the other states."

Awang Hashim (PAS-Pendang) suggested for Johor to sell raw water to Singapore but not to buy treated water from the republic to save cost.

To this, Santhara said it was a good suggestion.

"Unfortunately, when we had the opportunity to rectify the contract in the 1980s, it was not done. I don't understand why, " he said.

Dr Wee interjected to remind Santhara that it was Dr Mahathir who decided not to raise the water tariff on the sale of water from Johor to Singapore.

"As far as I know, this was done in 1987 when YB Langkawi was the Prime Minister then.

Read Also
Mahathir: Give us 5 years to resolve country's problems 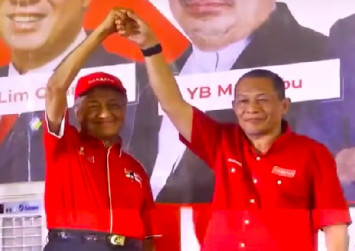 In response, Santhara said things were different now as Dr Mahathir made the decision back then when he led the Barisan Nasional government.

"But now, he sits in a Pakatan Harapan Cabinet and is the Prime Minister and Pakatan chairman.

"The thinking now is to resolve the problem, " he said.

Dr Wee then pointed out that the time to resolve the water agreement with Singapore has since passed.

Separately, Water, Land and Natural Resources Minister Dr Xavier Jayakumar said the water tariff was expected to go up between seven and 70 sen per 1,000 litres once the new Tariff Setting Mechanism comes into effect next year."

We have done research on three bands, in relation to the volume of household water usage.

"Those under Band 3 will pay more due to higher usage but most or about 60 per cent fall under Band 1, " he said, urging the public not to wash their cars daily to ensure lower monthly bills.

Dr Xavier said there would be some public backlash once the water tariff was raised.

"Many have no qualms paying RM30 to top up their cellphones but make a fuss when the water cost goes up by 30 sen, " he said.