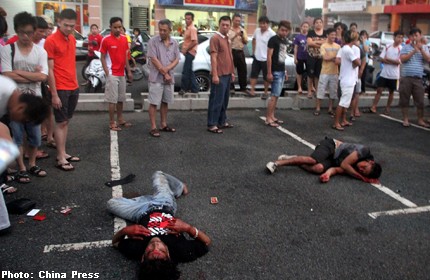 AFTER-MATH: Some snooker hall customers used their cue sticks to fend off these robbers, who were later taken to a nearby clinic.

PAHANG - Not only did five armed robbers fail in their attempt to rob a snooker hall in Pahang, two of them were beaten up by patrons.

The five - made up of foreign workers and locals - had rushed into the hall at Triang's Golden Triangle Mall at about 6.45pm on Sunday.

Three of them headed straight for the cashier and started fighting with staff.

Some customers, who had been playing snooker, used their cue sticks to fend off the robbers.

Three robbers ran off and got into a car, which had been waiting downstairs.

Upon seeing this, some people ran towards the car and even broke a few of the car's mirrors.

The trio managed to escape, reported China Press, but the remaining two were surrounded at the carpark.

Customers of a nearby coffee shop heard about the attempted robbery and joined the crowd, and the pair were beaten until they begged for mercy.

The police arrived and told the crowd that they should have notified the police instead of taking justice into their own hands.

The police then asked if anyone in the crowd would be willing to take the injured robbers to a nearby clinic while waiting for the ambulances.

The crowd was initially reluctant to help. Finally, some people took the robbers to clinics in their cars.

The five - made up of foreign workers and locals - had rushed into the hall, which is located at Triang's Golden Triangle Mall in Pahang, at about 6.45pm on Sunday.