Malaysia is likely to maintain its “quiet diplomacy” in dealing with China ’s sweeping maritime claims instead of heeding calls to be more aggressive, with Kuala Lumpur wary of Beijing’s tendency to enact punitive measures against those that challenge it openly.

This was among the views shared by Malaysia’s leading scholars of the South China Sea dispute in a webinar on Thursday concerning Kuala Lumpur’s stance on the matter.

Shahriman Lockman, one of the three Malaysian speakers in the discussion organised by the S. Rajaratnam School of International Studies in Singapore, said it was a “common mistake to view the South China Sea dispute and the roles and policies of the claimants as some kind of morality tale”.

But “in the real world, all political leaders have to deal with the fact that China is very willing to be either very generous or very punitive with regards to economic relations”, said Shahriman, a fellow at the Institute of Strategic and International Studies.

Not only is a strong economic relationship with Beijing key to Malaysia’s own interests, but China may be a source country for Covid-19 vaccines, so keeping ties on an even keel is vital, the researcher and his fellow panellists said.

Despite being seen for years – through its public statements – as a more dormant claimant in the South China Sea dispute than other states such as the Philippines and Vietnam , Malaysia has found itself thrust into the spotlight recently.

In April and May, for instance, the West Capella oil exploration vessel contracted by Malaysian state energy firm Petronas was embroiled in a stand-off with Chinese coastguard vessels – an episode that briefly attracted the attention of other players, with the US and Australia holding military exercises in the area as a show of force towards China.

Malaysia is also among the countries that have rattled Beijing this year through the use of diplomatic notes to the United Nations in opposition to China’s nine-dash line claim.

This so-called lawfare strategy involves some nine countries, with a joint note verbale issued in September by Britain, France and Germany being the latest of the missives.

Still, Shahriman said his conversations with officials who set Malaysia’s policies regarding the maritime dispute showed a continued preference for quiet diplomacy.

The relatively peaceful resolution of the West Capella stand-off which ended “without ships ramming into each other and so on and so forth” was validation that this approach worked, he said.

Compared with a similar episode in Vanguard Bank in 2019 between China and Vietnam where there was reportedly the use of water cannons and boat ramming, “somehow we settled this a little more thoughtfully”, he added.

The West Capella stand-off, Shahriman said, was resolved following a “sort of arrangement for that to be de-escalated between the Malaysian and the Chinese side”.

The researcher said some in the Malaysian government believed the presence of the US and Australia “actually made things worse as it escalated the whole situation and left us with more ships to deal with”.

He also was of the view that Malaysia and other claimants should avoid giving China an excuse to escalate matters in the disputed sea.

Also forecasting the continuance of Malaysia’s quiet diplomacy were two other panellists: B.A. Hamzah, a veteran scholar of international law, and Lai Yew Meng, an associate professor of politics in University Malaysia Sabah.

Lai said the sheer scale of the economic relationship – with China being Malaysia’s largest trading partner for 11 consecutive years – meant the maritime dispute would be dealt with deftly. He agreed with Shahriman that rights over the sea’s hydrocarbon reserves were at the core of the dispute.

Read Also
Why is the Philippines reviving its dispute with Malaysia over Sabah? 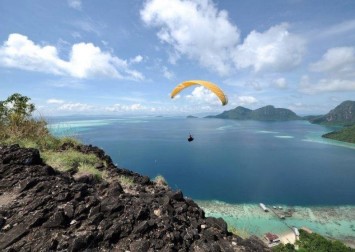 Malaysia’s dependence on revenue from oil and gas in the sea – dubbed the “second Middle East” – meant keeping the area “a sea of cooperation rather than a sea of conflict” was important, Lai said. The energy sector contributes about 20 per cent to Malaysia’s annual GDP.

Hamzah said while Kuala Lumpur would continue to be “upset with Beijing’s provocations” in areas it deems part of its own territorial waters and exclusive economic zone, engagement would continue.

“Malaysia will not rush, in my view, to bandwagon with those who wish to contain and sanction China for various reasons,” Hamzah said.

The speakers also voiced concerns about disputes among claimants that may have been glossed over with much of the discussions surrounding the South China Sea pitting Beijing against everyone else.

In addition to Malaysia, Vietnam, the Philippines and Brunei dispute China’s claim as contravening their sovereignty as well as their maritime rights as enshrined in the United Nations Convention on the Law of the Sea.

Indonesia, Southeast Asia’s biggest country by population and land mass, insists it is not a claimant state, though the northern reaches of the exclusive economic zone of its Natuna islands stretch into China’s nine-dash line boundary.

On whether non-regional players should have a role to play in resolving the dispute, Hamzah said they would only “complicate” matters, given that Southeast Asian claimants themselves have their differences over boundaries.