SRC trial: $13.8 million transferred to Najib for the purpose of corporate social responsibility

Ihsan Perdana's former accounts executive Aishah Ghazali, 37, testified that she was instructed by managing director Shamsul Anwar Sulaiman to transfer the funds through three transactions on Dec 26, 2014, and Feb 9, 2015.

Ms Aishah, who was reading from a witness statement, said she was instructed by Datuk Shamsul to prepare a remittance form for the transfer of Ihsan Perdana's funds on Dec 26, 2014. 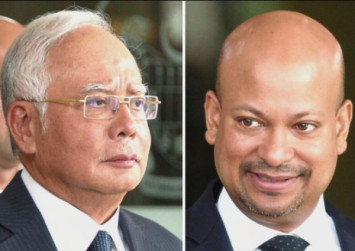 She said she was shown by Dr Shamsul an e-mail from one Ung Su Ling, who she knew was a representative of Yayasan Rakyat 1Malaysia (YR1M).

"The e-mail contained information of the recipient's bank account, and Dr Shamsul ordered me to make the transfer based on that information," she said on Wednesday (May 15).

The witness said she then prepared two remittance forms as per instruction.

A total of RM27 million was transferred from Ihsan Perdana's account to an AmBank account bearing the number 211-202-201188-0 under the name "AmPrivate Banking -1MY".

"The purpose of the transfer was recorded as 'CSR Programmes' which is usually what I would note there," she said.

Ms Aishah said she also transferred RM5 million to an "AmPrivate Banking - MY" account bearing the number 202-201190-6 for the same purpose on the same day.

Previously, the High Court heard that bank accounts with numbers ending 1880 and 1906 belonged to Najib.

The witness said that after preparing the remittance form, she obtained the signatures of Dr Shamsul and Ihsan Perdana's finance director Abdul Aziz Ismail and went to process the documents at Affin Bank, The Curve.

After returning to the office, Ms Aishah said she was ordered by Dr Shamsul to check who the owners of the two bank accounts were but failed to retrieve the info, as she was informed by Affin Bank that the bank did not have this information.

She said that on Feb 9, 2015, she received another instruction from Dr Shamsul to transfer RM10 million from Ihsan Perdana's account to an AmBank account ending 1880 for the same CSR purpose.