The court was told that while the central theme of the defence had been that Jho Low did not have knowledge of the cheques issued by Najib, the evidence however pointed out that he took steps to ensure there were sufficient funds in Najib's account at all times.

Ad hoc prosecutor Datuk V. Sithambaram, who was submitting here at the SRC International Sdn Bhd trial where Najib is accused of misappropriating RM42 million (S$13.8 million) of the company's funds on Wednesday (June 3), read to the court excerpts of his cross-examination of the accused to show the coordination between Jho Low and principal private secretary Datuk Azlin Alias (on behalf of Najib) as well as coordination between Jho Low and Najib himself in ensuring there was enough money for cheques to be issued.

The excerpts, among others, included a BBM (BlackBerry Messenger) conversation relating to Najib's purchases via credit card in Hawaii, in which Jho Low alerted former AmBank relationship manager Joanna Yu to ensure that the payment went through.

"The evidence led at the trial established that Jho Low was not always acting reactively to ensure Najib cheques were not dishonoured.

"To the contrary, Jho Low attempted to ensure the accused's account had sufficient funds even before he (Najib) issued his cheques," Sithambaram said.

This action of Jho Low with regards to Najib's account, Sithambaram said, was not always reactionary but "visionary" too.

The prosecutor said Jho Low did not act on his own accord but for the benefit of the Pekan MP.

Meanwhile, on the issue of money laundering charges, the prosecution contended that it was "willful blindness" when Najib failed to inquire about the source of the money that flowed into his account.

"Najib, being the bank account holder must be vigilant and cautious of funds entering his personal bank accounts that he ultimately expended fully.

"The accused cannot simply direct other persons to ensure funds are well-replenished in his bank accounts for him to spend without caring about the source of the funds," he said. 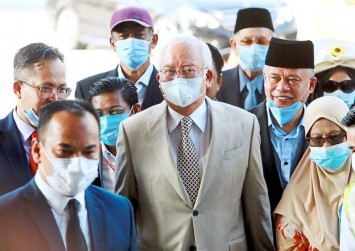 Sithambaram said Najib had exhausted the donation money purportedly from the Arabs and returned a portion of it which he received in his bank accounts later and questioned how Najib could issue more cheques without being suspicious of the funds in his accounts.

"A reasonable person would question such a huge amount," he said.

In his closing argument, Sithambaram moved the court to convict Najib on all seven charges.

"If everything is looked at, I humbly submit that the seven charges have been proven.

"I have finished my submission. Tomorrow is their day," he said, referring to the defence who would be doing its rebuttal on Thursday (June 4).

Najib's defence had largely contended that he did not know the monies in his bank accounts originated from SRC International, a subsidiary of 1Malaysia Development Bhd (1MDB).