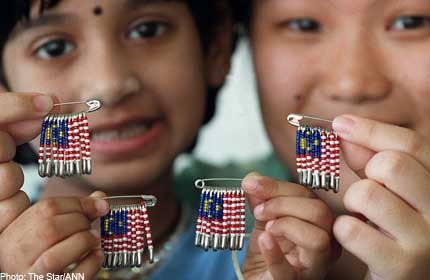 PETALING JAYA - Malaysians should stop being oversensitive and focus on the positive side of living in a multi-racial and multi-religious country, says Datuk Azman Amin Hassan.

The National Unity and Integration Dep­artment director-general said that as the 56th Merdeka Day approached, it was important for Malaysians not to disrupt the national unity that was achieved over the years.

He said people of various faiths and communities had to closely interact in order to better understand each other's differences.

"This is better than condemning or creating animosity," Azman said.

"We should not divide ourselves as Muslims and non-Muslims.

"The Malaysian public is sensitive and we need to work on improving religious harmony with a lot of inter-faith dialogues," he said yesterday.

Azman was commenting on recent events, including the setting up of a Facebook page called "Semenanjung Malaysia Anti Sabah & Sarawak (Peninsular Malaysia is anti-Sabah and Sarawak)" and other incidents which touched on religious sensitivities.

These also included the posting of a Ramadan greeting with a photograph of bah kut teh and the caption "Selamat Berbuka Puasa" by sex bloggers Alvin Tan and Vivian Lee and the recent Astro disclaimer on a documentary on the new Pope.

Azman noted that oversensitivity was easily propagated on social media where messages were transferred quickly and easily accessible.

"It seems there is one issue related to race or religion cropping up every week," he pointed out.

"However, I believe such incidents do not reflect the overall sentiments of Malaysians," he added.

"It is only a minority group that wants public attention."

Meanwhile, an industry source said Astro had to comply with Provisions 3.12 and 3.15 of the Malaysian Communications and Multi­media Content Code, adding that it would be in direct violation if it did not put in such a disclaimer before running programmes with references to religious views and scenes.

"As a licensed broadcaster serving all segments of Malaysia, Astro has to play a balanced role," said the source.

Provision 3.12 of the code says broadcasters shall have regard to Islam as the country's official religion while keeping in mind the constitutional right of freedom of religion of all other communities.

Provision 3.15 says the propagation of any religion other than Islam whether directly or indirectly is not permitted.