Women's rights activists have called for Malaysia's women's minister Rina Harun to take down the posters.

PETALING JAYA - Malaysia's Women and Family Development Ministry has apologised for posting a series of 'household happiness' posters criticised as being sexist.

In a statement on Tuesday night (March 31), the ministry said it had received many responses from various groups over the controversial posters posted on its social media accounts.

According to the ministry, the approach taken by them was to share a method to maintain a positive family relationship while working from home.

The ministry also said they were promoting daily tips and positive messages on social media with the #wanitacegahcovid19 (women prevent Covid-19) hashtag, which covers various themes aim at women. 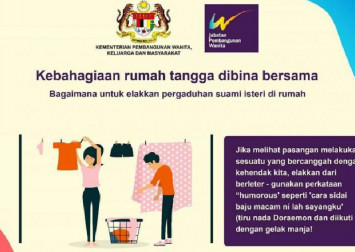 "We apologise if there were certain tips that were not appropriate and offended the sensitivities of certain groups. We will be more careful in future, " it said in a statement posted on Instagram Tuesday.

In a series of Facebook posts, the Malaysian women's ministry offered tips for how wives should behave during the current movement control order period as a result of the coronavirus pandemic.

One post - now deleted - showed a picture of a couple hanging up clothes together next to a caption that advised women to "avoid nagging" their husbands and to imitate the squeaky voice of Doraemon, a cartoon robot cat from Japan that is popular across Asia.

Other posts advised women working at home to wear make-up and dress neatly, rather than in casual clothes.

Social media lit up with anger and disbelief at the posts, with one netizen asking "how will dressing up and putting on make-up at home (prevent) Covid-19? Pray, tell?"

There have been fears of a surge in domestic violence worldwide as the stress caused by confinement and job insecurity increases the likelihood of conflicts.

A government-run helpline in Malaysia for vulnerable people, including victims of domestic abuse, has seen an increase in calls of more than 50 per cent since the start of the lockdown on March 18, local media reported.