SHAH ALAM - The plot has thickened as the police step up investigations into the death of Cradle Fund Sdn Bhd chief executive officer Nazrin Hassan.

Police are tight-lipped on the various motives that had cropped up, while the venture capitalist industry is stunned over the developments surrounding the case.

Police have denied that two teenagers were arrested to assist in investigations.

Selangor police chief Comm Datuk Mazlan Mansor declined to comment on talk that the two teenage relatives of Nazrin, were brought in for questioning.

To further questions if two teenagers were brought in for questioning or if puncture wounds were discovered on Nazrin's neck, the state police chief kept a tight lip.

"No comments ... the case is still subject to investigations," said Comm Mazlan. So far police have detained Nazrin's wife Samirah Muzaffar and her ex-husband, both 43.

A one-week remand order was obtained from the Petaling Jaya magistrate's court.

An English newspaper reported that police had also picked up two teenagers on Wednesday night, to assist in investigations after puncture wounds were discovered on the neck of the deceased.

The puncture wounds, it claimed, are believed to have been inflicted with an arrow shot. It was reported that the boys were picked up after it is said that they possessed archery skills.

An executive in the venture capitalist industry said that the turn of events had attracted wide attention as the couple were well known. 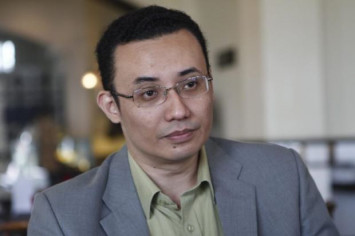 "They were known as the 'power couple' because Nazrin's job is to identify new companies that can be grown, while the wife looks at the prospective companies and grooms them towards a listing.

"The turn of events since Hari Raya has stunned many who know this couple. They are surprised that family members are detained to assist in investigations," said the executive who declined to be named.

On July 14, just days before Hari Raya, Nazrin died after a fire at his home in Mutiara Damansara.

Initially, the cause of death was attributed to his phone having exploded while charging and it sparked off a fire.

Nazrin, who was found with 30 per cent burn marks on the upper floor of his double-storey house, was even speculated to have died due to the smartphone exploding or he was overcome by smoke.

Early last month, police reclassified the case as murder following a forensic investigation report by the Fire and Rescue Department.