Taste of the exotic: Nasi Lemak condoms from Malaysia

Port Klang, Malaysia - A Malaysian condom company is hoping to spice up sex lives with a contraceptive that tastes like the country's ultimate comfort food - a chili-infused rice dish known as nasi lemak.

Industry giant Karex, which claims to be the world's biggest condom maker, already offers an array of flavours in various pleasure-boosting textures, from grape to the pungent tropical fruit durian.

It is now set to launch a condom inspired by nasi lemak, usually translated as "fatty rice", originally a cheap breakfast consumed at street-side stalls but which is now common across the country, including at higher-end restaurants.

The dish consists of rice cooked with coconut milk, served with anchovies, roasted peanuts, a boiled egg, sliced cucumbers and a dollop of fiery chili sauce. 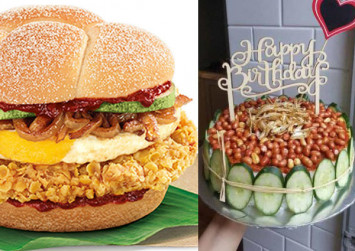 "We Malaysians are divided across our political ideas, religion and race," Karex chief executive Goh Miah Kiat told AFP from his office in Port Klang, outside the capital Kuala Lumpur.

"I felt one thing that unites us all (is): 'Where's the best nasi lemak place you've been?'" Malaysia has been beset over the years by tensions between its Muslim Malay majority and its substantial ethnic Chinese and Indian minorities, with critics accusing the government of introducing policies that favour the Malays.

Karex - which sells condoms under the brand name Carex - spent six months carrying out tests before coming up with its nasi lemak prophylactic, which smells faintly of coconut and is coated with a warming lubricant.

The company is working on packaging and the limited-edition condom should hit shops in November or December.

Goh insisted the range of wacky condoms were more than just a marketing gimmick, and were about trying to encourage contraceptive use in the Muslim-majority country.

"For me, it's about public health, and I want to get the message across to people," Goh said.

Conservative attitudes are still common in parts of Malaysia and some people frown on the use of contraceptives in the belief they encourage pre-marital sex.

During a parliamentary debate in March, a lawmaker from an influential Islamist party proposed caning unmarried couples who had sex.

The nasi lemak condoms are aimed at the local Malaysian market but much of what Karex makes goes abroad.

The company produces five billion condoms annually from its four factories, with much of its output purchased in bulk by governments or international agencies for safe-sex drives.