Teacher fears for her safety after student's death

KUALA LUMPUR - The teacher involved in a student’s recent attempted suicide case fears for her safety after receiving hate messages and death threats, with some netizens even sharing her picture online.

National Union of the Teaching Profession (NUTP) secretary-general Harry Tan said the public should let justice run its course, adding that both the teacher and her husband are members of the union.

“We’ve met with them and they’ve given their side of the story.

“They have lodged a police report and given their full cooperation to investigators. Nice to meet you: Chong (right) having a light moment with some participants after the closing ceremony of the second Asean Chinese Education Academic conference at Wisma MCA, Kuala Lumpur.Photo: The Star/Asia News Network

“Please stop hurling abuse at them and making threats. Some have even shared the teacher’s photo on social media, which is very traumatic for the family,” he said yesterday.

Appealing to the authorities to act swiftly, he said the NUTP was deeply saddened by the tragic death of 14-year-old M. Vasantha Piriya in Penang last week, and would provide “full assistance” to ensure justice for all parties.

He also reminded the union’s 200,000 members to always be vigilant of their students’ behaviour. 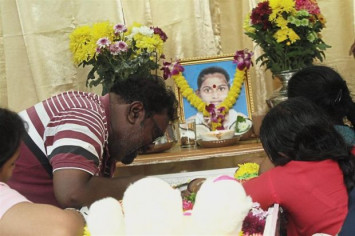 “If something is amiss or out of the ordinary, adhere to the school’s standard operating procedure (SOP) when dealing with the problem.

“Record every single detail and inform your superiors,” he added.

On Jan 24, Vasantha attempted suicide after she was accused of stealing her teacher’s mobile phone.

She was left in critical condition after the attempt and died on Feb 1.

The teacher had reportedly reprimanded the girl in front of her classmates and later questioned her for hours with several other teachers before she and her husband sent the student home.

He added that investigations had been completed and the case referred to the deputy public prosecutor (DPP).

Supt Shafee said six police reports were lodged about the case, including two from the teacher.

“The teacher lodged a report denying her phone had been found, and another report was about her feeling embarrassed after the incident went viral on social media,” he told reporters after the opening of the Visionary Youth Programme in SMK Teluk Bahang yesterday.

“A life was lost. It’s very sad but please let the professionals do their work. Don’t interfere and make the situation worse.

“We’ll ensure that the truth prevails,” he said, adding that the ministry is still waiting for the detailed report on the case.

He also dismissed allegations that the ministry was protecting the teacher involved.

“No way. We’ve always acted fairly in dealing with teachers who have gone against SOP or the law,” he told reporters after closing the second Asean Chinese Education Academic Conference here.