Teen high on drugs drives against traffic on Malaysian expressway, killing one 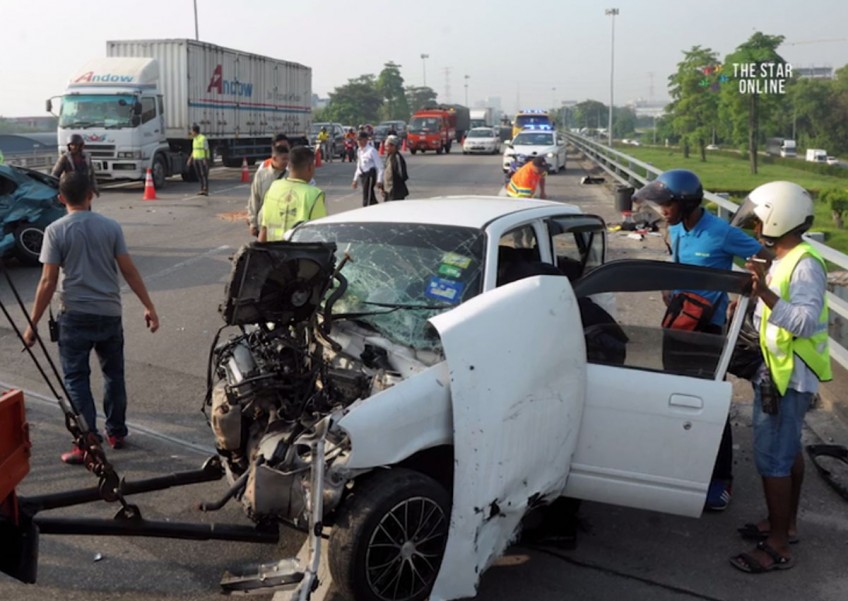 BUTTERWORTH - A 19-year-old part-time model, who was allegedly high on drugs, drove against traffic on the North-South Expressway here and crashed her car, killing one motorist and damaging five vehicles.

In the early morning incident yesterday, the teenager drove her vehicle against traffic at the 134th kilometre of the three-lane expressway and first collided with a car, killing its driver Mohamad Fandi Rosli, 26, at 7.50am.

Mohamad Fandi, who was heading north towards Sungai Petani, just got married in December.

The impact of the crash then caused her car to hit a 27-year-old motorcyclist.

Her vehicle then spun out of control and hit two other cars and a van before coming to a halt.

The motorcyclist and the other drivers, aged between 31 and 59, were not seriously injured.

They were given outpatient treatment at the Seberang Jaya Hospital.

OCPD Asst Comm Nik Ros Azhan said it was not known how the teenage girl got onto the three-lane expressway in the opposite direction.

"She was detained and brought to the hospital for blood tests.

"The tests came back positive for methamphetamine," he added.

The accident also caused a major traffic jam on the expressway as the three lanes were blocked by the damaged cars.

Motorists heading to work had to use the road beneath the underpass to bypass the accident scene.

At the hospital mortuary, distraught family members came to claim the body of Mohamad Fandi, who was a factory worker.

His father, retired government servant Rosli Lin, 56, said his son, who was the eldest of two children, was married to a nurse attached to the Selayang Hospital.

"He used to stay in a rented house in Seberang Jaya for two years as it was near his factory, where he had worked as a technician.

"But he moved back home with my wife and I in Tikam Batu after getting married," he said at the mortuary.

Rosli said his son was on his way home after finishing the overnight shift when he was killed.