Temperatures soar to 36°C in Malaysia

PETALING JAYA - Temperatures continued to soar throughout the country as the number of areas on heatwave alert doubled to 10 compared with two weeks ago.

The dry weather has also led to water supply concerns in some states, including Perak and Kelantan, while the Education Ministry has advised schools to monitor outdoor activities and ensure students drink enough water, in light of the current heatwave, which is set to last until April.

The hottest spots yesterday were Chuping (Perlis); Kubang Pasu, Kota Setar and Sik (Kedah), which all hit a high of 36°C.

Category 1 is when the mercury climbs to between 35°C and 37°C for three days in a row. Since Feb 13, the number of towns on Category 1 has gone up from five to 10.

According to MetMalaysia, the current hot weather in the west coast states of the peninsula and Sabah is expected to continue until the end of next month. 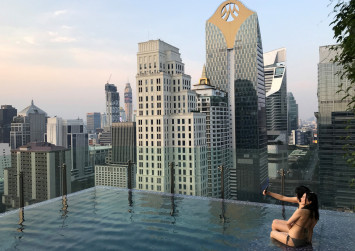 The hot weather is a normal phenomenon, which begins at the tail end of the north-east monsoon.

The monsoon started in Novem­ber and ends in April, and is followed by the intermonsoon period, which usually brings more thunderstorms in the west coast and interior of the peninsula, east coast of Sabah and central Sarawak.

Data from the Selangor Water Management Authority website (iwrims.luas.gov.my) showed that the water level in Sungai Selangor dam, which supplies 70 per cent of the treated water in the Klang Valley, was still very high at 98 per cent yesterday.

However, in Perak, state Public Amenities and Infrastructure Committee chairman Abdul Yunus Jamhari has requested padi farmers in Kerian, which is the main padi-farming district in the state, to control their water use due to the current hot and dry weather.

"If we waste water in our padi fields in the current hot weather, it could affect our crops," he was quoted as saying by Bernama.

Separately, the ministry has urged schools to take precautionary measures due to the heatwave.

In a statement, it said schools must monitor outdoor activities and to postpone them if it is too hot.

The statement also asked schools to ensure adequate supply of clean drinking water and for teachers to encourage students to drink lots of water.

A heatwave is declared when an area hits Category 2, which is when temperatures rise above 37°C for three consecutive days.

When this happens, the Energy, Science, Technology, Environment and Climate Change Ministry is empowered to officially declare a heatwave in that location.

This is to enable the relevant authorities to take follow-up action, such as closing schools.

When an area hits Category 3 (temperature above 40°C three days in a row, which is considered the emergency level), the National Disaster Management Agency will be notified and the Prime Minister can declare an emergency.