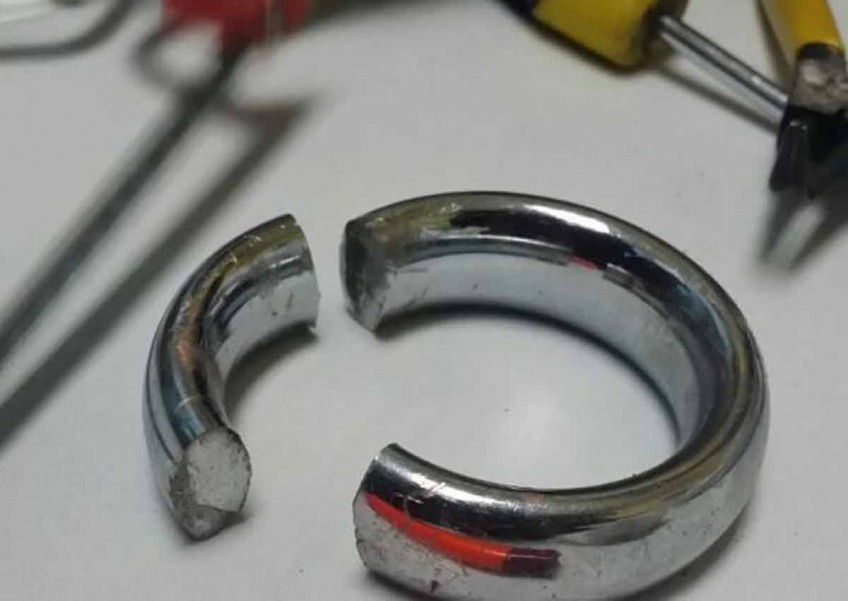 PETALING JAYA: The use of penis rings seems to have picked up in Malaysia, with many cases being reported of firemen coming to the rescue to remove such rings from hapless men.

That may be "merely" embarrassing, but there is also a real danger: If a penis ring is left on too long, it could result in impotency or worse, amputation, says a urologist.

Dr George Lee, a columnist for The Star Online, said that if the ring is left on for more than six hours, the man could end up impotent due to damaged nerves and blood supply.

"In the worst case scenario, when the man actually leaves it on for more than a day, the constriction becomes tighter, it starts eroding into the penis and gets infected, and becomes necrotic. Necrosis means cell death.

"We have actually seen in very severe cases, men end up losing their penises because of that," said Dr Lee.

Read also: 12 hours of pain as man gets penis stuck in ring

Such were the risks involved for the man who on Saturday had to be rescued by the Fire and Rescue Department from a ball bearing device that was stuck on his penis for more than 12 hours.

It was just the latest in such cases. In January, a man had his penis stuck in a ring for three days, while another had to be similarly rescued last December.

Kuala Lumpur Fire and Rescue Department chief operations officer Samsol Maarif Saibani said then that firemen had been called in to save the day in many such cases last year.

Dr Lee said that cases of penises stuck in rings are not as uncommon as we think, though most of these are resolved without the need to call firefighters.

"In order to sustain the erection, some men will put a constricting ring at the base of the penis so that the blood will go in but cannot come out.

"The problem arises when after they have sex - they just forget (the ring) and go to sleep, or something like that, and the blood continues to go into the penis," he said.

Most of the time, he said, these men were able to take off the rings themselves with some soap or by cutting them if they were plastic.

Read also: Penis rings will give you a hard time

However, metal rings pose a bigger problem as these cannot be easily cut, even at hospitals, as most of them do not have the necessary tools.

"What we do is that we use a needle to pierce into the penis and we aspirate (draw out) the blood.

"When we do that, most of the time it will actually deflate the erection and we will be able to wiggle the ring off of the penis," he explained.

It is when this method doesn't work that the firefighters are brought in, he said.

Dr Lee expressed his puzzlement that men still turn to penis rings as they date from the 1960s, and there is plenty of modern medicines that can help them maintain their erections.

"In the 21st century, if men are too embarrassed to see doctors to buy the blue pills, they can go online.

"What I am suggesting is that oral treatment is so good these days that it can achieve an 80 per cent success rate, so to go for rings doesn't make sense," he said.

For those who still insist on using rings, either because they don't want to use tablets or they find some pleasure in using the rings, he suggested "they better use plastic rings."