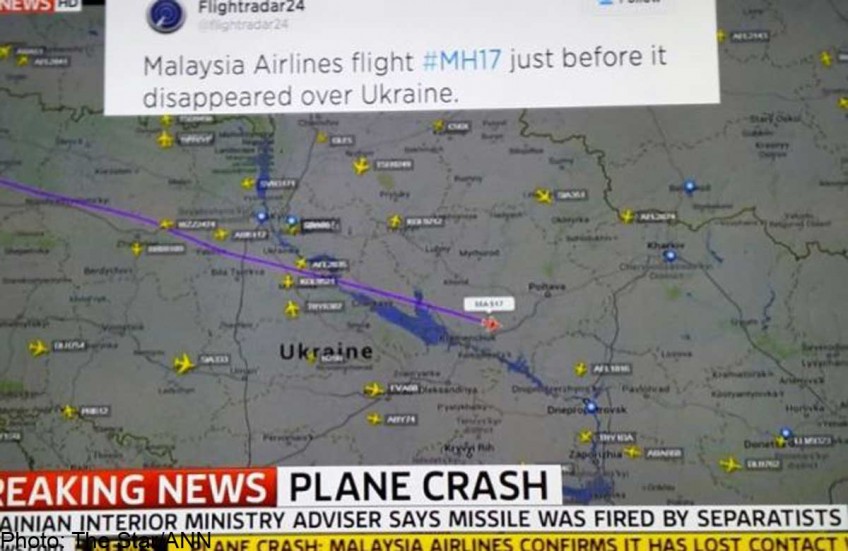 The plane, MH17, was flying from Amsterdam to Kuala Lumpur with 280 passengers and 15 crew members.

10.15pm: MAS confirms it received notification from Ukrainian Air Traffic Control (ATC) that it had lost contact with MH17 at 30km from Tamak waypoint, approximately 50km from the Russia-Ukraine border.

11.40pm: Moscow based news agency Interfax says Malaysian passenger airliner was shot down at altitude of 10 km above Eastern Ukraine.

> They confirmed the location of a burning Malaysian plane in Eastern Ukraine.

> The Ukrainian Interior Ministry also confirmed that all passengers and crew are dead. The aircraft was "shot down" while cruising at an altitude of 30,000ft.

> Igor Strelkov, the military commander of pro-Russia separatists, posted on social media shortly before MH17's crash that rebel forces had brought down an Antonov An-26, an aircraft commonly used by Ukrainian forces, in the same area.

12.03am: Ukrainian Prime Minister Arseniy Yatsenyuk orders an investigation into the crash.

12.05am: Malaysian Prime Minister Datuk Seri Najib Tun Razak tweets, "I am shocked by reports that an MH plane crashed. We are launching an immediate investigation."

12.18am: Ukrainian officials at the location of the crash confirm at least 100 bodies are found at the location and that body parts were scattered up to 15km from the site.

12.30am: Both Ukrainian authorities and rebel leaders deny shooting down MH17. A ground-to-air missile was the suspected to have brought down the aircraft.

> Russian President Vladimir Putin is in contact with United States president Barrack Obama on the crash, according to RIA news agency.

12.45am: Location of the crash site was revealed to be the settlement of Grabovo in the Donetsk region.

02.28am: Interfax reports that Pro-Russian separatists claim to have found MH17's black box.