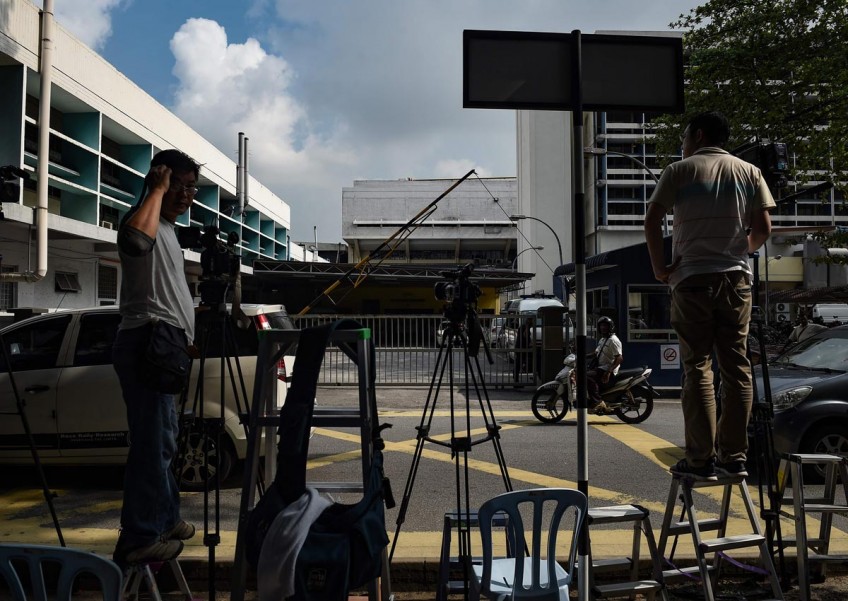 Members of the media wait opposite the gate of the forensics wing of the Hospital Kuala Lumpur, where the body of Kim Jong-Nam is being held, in Kuala Lumpur.
AFP

KUALA LUMPUR - The mood was tense outside the National Institute of Forensic Medicine at Hospital Kuala Lumpur, after a tip-off that Kim Jong-nam's remains there could be claimed by the day's end.

The unconfirmed information had come from a police source who also said that Special Branch officers were in the building.

Some plainclothes policemen were seen in the vicinity of the forensics building at noon yesterday. Then, a multi-purpose vehicle entered the compound at about 1.18pm and parked in front of the morgue.

The plainclothes men stayed close to the MPV which had its rear door open.

One of the policemen was seen pointing a camera phone at the vehicle, as if recording something inside. The MPV left the compound at about 1.55pm.

Several other policemen outside the building were seen recording its departure, using their phones.

A four-wheel-drive vehicle, which was parked by the roadside, promptly followed the MPV.

About two minutes later, a police car that was inside the compound since the morning, also drove away.

Another car, which sported a Disaster Victim Identification sticker on its windshield, left at about 2.20pm.

It was learnt that the MPV was dispatched to the morgue on the instructions of a government offi­cer. But it is unknown if it was for the purpose of collecting and transporting Kim's remains.

The comings and goings of the vehicles were closely watched by the many local and foreign journalists who have been camping outside the compound since Kim's death last month.

When contacted, Inspector-General of Police Tan Sri Khalid Abu Bakar said to "wait until tomorrow" (today) for confirmation on whether or not the remains were claimed.