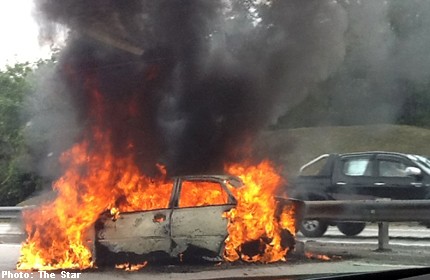 FIERY END: The Proton Waja that burst into flames after colliding with a BMW.

He pulled the motionless toddler out of a flaming wreck with seconds to spare, only to see her turning blue from a lack of oxygen.

Fortunately, a few seconds was all Dr C.S. Kumar needed.

"The baby girl, who looked like she was 14-months-old, was not breathing," said the Universiti Malaya Medical Centre orthopaedic trauma unit head.

"She was like a lifeless, blue doll. I put my ear to her chest and heard her heart beating."

Dr Kumar quickly carried her to the middle of a highway to perform mouth-to-mouth and mouth-to-nose resuscitation, reported Malaysia's The Star.

Recounting the drama, which took place on Thursday at the KM333.1 mark of the PLUS Expressway between Tapah and Bidor, Dr Kumar, who is a consultant orthopaedic surgeon, said he and his brother-in-law were returning to Kuala Lumpur from Penang with their families in two cars after a four-day holiday.

"A BMW and a Proton Waja had collided, causing the Waja to burst into flames," he said.

Dr Kumar, a father-of-three, and his brother-in-law quickly pulled over in the emergency lane and rushed to the burning car.

They pulled out the driver, while another passer-by pulled one of the passengers out.

In the back seat

That was when he saw the toddler and her mother in the back seat.

Dr Kumar said that this was the first time he had seen an accident involving a car on fire.

"It was amazing to see fellow Malaysians coming together to save lives," he said.

Tapah OCPD Superintendent Som Sak Din Keliaw said the driver of the Waja had wanted to switch lanes prior to the accident.

"The impact of the collision had damaged the gas tank, causing the vehicle to burst into flames," he said.

"The driver and passenger of the Waja sustained light injuries and received outpatient treatment at the Tapah Hospital."