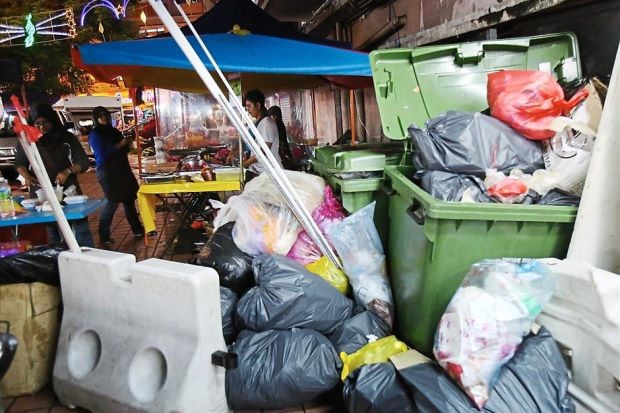 The Ramadan bazaar in Jalan Tuanku Abdul Rahman is one of the hotspots that produce rubbish which are mostly made of up of good food.
The Star/ANN

The people are wasting a lot of food during the month of Ramadan. For the first 15 days in June, an additional 600 metric tonnes of rubbish were collected from the city; mostly from the Ramadan bazaars.

Alam Flora chief executive officer Datuk Mohd Zain Hassan said based on their data, a lot of food was being thrown away the last couple of weeks.

"From the 600 metric tonnes, more than 400 metric tonnes or 66 per cent was food waste from Kuala Lumpur. The rest were from Putrajaya and Pahang,'' he said.

He added that the average waste generated in Kuala Lumpur in a day was about 2,500 metric tonnes.

However, the figure has shot up to more than 3,000 metric tonnes per day.

Let's put that amount into perspective. If one packet of nasi lemak is 200gm, that would mean that KL folk are dumping a whopping two million packets of nasi lemak in just two weeks! "The main contributors of this wastage are the Ramadan bazaars and restaurants in the city.

"A lot of the waste is also food packaging such as polystyrene and plastic," Mohd Zain said.

All this food waste and other organic matter decomposes in the landfill and this produces methane - a dangerous greenhouse gas.

"People tend to buy too much and end up wasting food. Bazaar traders are also preparing too much food and are forced to throw away surplus food at the end of the day.

"Most of it is good food and can be donated to welfare homes or the needy.

"It is such a waste to see so much good food end up in the rubbish bin,'' he said. "Change begins with you and people have to start somewhere,'' he said.

Based on StarMetro's observation in Jalan Tuanku Abdul Rahman and Jalan Masjid India, two of the main hotspots for food wastage, the types of food that end up in rubbish bins and drains were curries, porridge, vegetables, noodles and various types of kuih.

Traders were also seen throwing out the drinks and curries into the drains nearby.

According to a Alam Flora officer, they had placed about 889 rubbish bins of various sizes in 94 locations in Kuala Lumpur. This number also includes compactors.

"By the end of the day, we need about 31 lorries and 470 workers, including drivers and supervisors, to transport all these rubbish to the landfill. "It is disheartening to see so much food go to waste especially when you hear of people in the world who are dying of hunger,'' said the officer.

It has been reported that the average household in Kuala Lumpur generates 1.3kg of waste daily.

Malaysian homes generate about 33,000 tonnes of waste daily, and out of this, 15,000 tonnes are food which still could be consumed.

This avoidable food waste is equivalent to three full meals for 2.2 million people, which is almost the population of Kuala Lumpur.

Citing research by the Solid Waste Management and Public Cleansing Corp, The Star reported that in a year, an average Malaysian household throws away food equivalent to a month's salary.