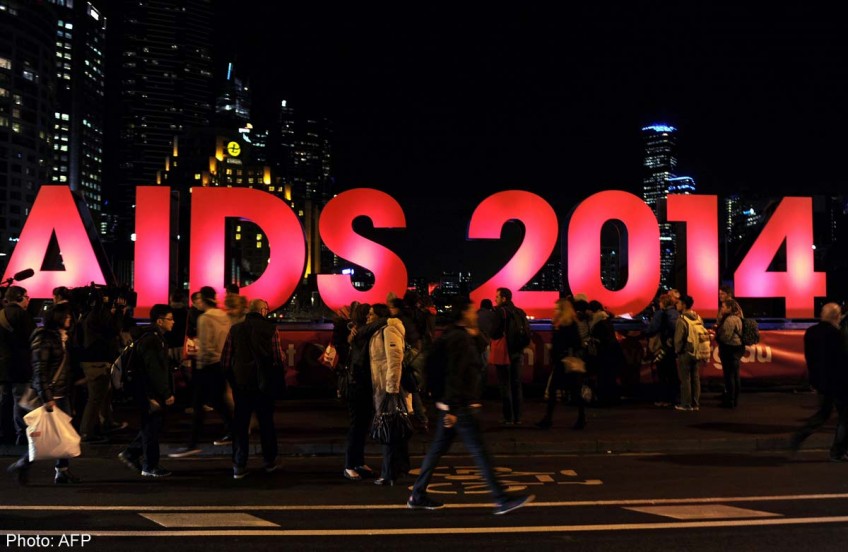 People gather next to a sign reading AIDS 2014 in Melbourne on July 18, 2014 after news that downed Malaysia Airlines flight MH17 was carrying many participants headed to the 20th International AIDS Conference planned this weekend in the Australian city.

MELBOURNE-International AIDS Society president Francoise Barre-Sinoussi on Saturday said six colleagues heading for a global conference in Melbourne were on a Malaysian plane that crashed over Ukraine, not 100 as reports suggested.

"The number that we have confirmed through our contacts with authorities in Australia, in Malaysia, and Dutch authorities as well is six people. It may be a little bit more, but not the numbers that have been announced," she said.

Australian newspapers on Friday said as many as 100 medical researchers, scientists, doctors and activists were on Malaysia Airlines Flight MH17 that went down en route from Amsterdam to Kuala Lumpur on Thursday.

All 298 people on board died, with US officials blaming armed Ukrainian rebels for downing the jet with a missile.

UNAIDS executive director Michel Sidibe had tweeted that "many" delegates to the 20th International AIDS Conference were on board, reinforcing fears of a high fatality rate.

Those confirmed dead include prominent Dutchman Joep Lange, a pioneer of cheap anti-retrovirals for the poor and a former International AIDS Society president.

Officials said Pim de Kuijer from STOPAIDSNOW was also on board, along with Lucie van Mens, director of AIDS Action Europe and her colleague Maria Adriana de Schutter.