Topsy-turvy days due to haze in Malaysia 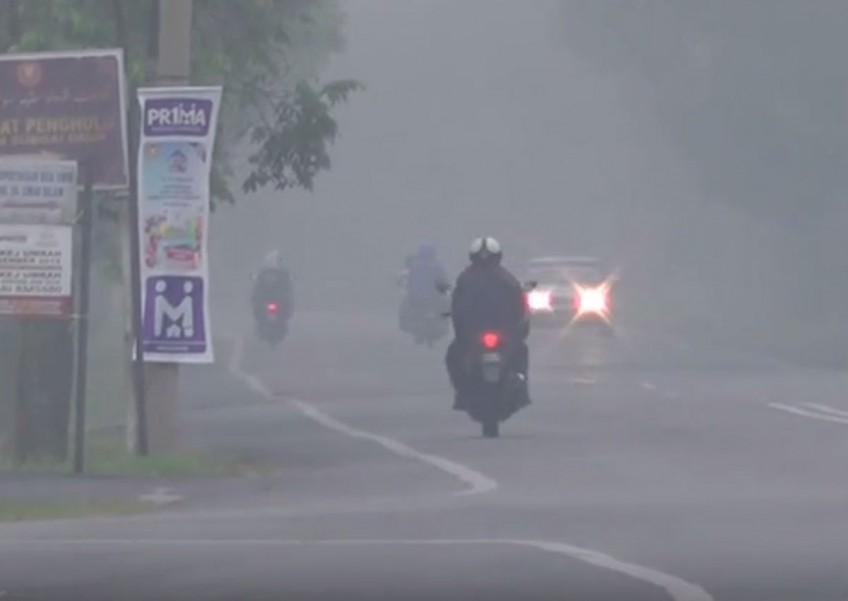 KUALA LUMPUR - The sudden closure of several schools in Penang in the afternoon has left many fuming.

Parents, teachers, school transporters and canteen operators were caught by surprise and things got topsy-turvy.

In George Town yesterday, a last- minute directive was issued for afternoon school sessions in Penang to close due to the worsening haze.

Education Department director Shaari Osman said he decided at about 11.30am yesterday to suspend the afternoon session when the Air Pollutant Index (API) reading neared 150 and began sending out the directive by facsimile.

He said the decision was made at the last minute as the air quality started to decrease rapidly from 11am.

Some schools, however, claimed that they only got the directive at about 2pm although the afternoon session began at 1.10pm in some schools.

While some schools, which got the directive earlier, turned away students sent by their parents at the gates, others were caught in a dilemma as they only knew about the closure after all their students had arrived.

At Convent Green Lane (CGL), parents were surprised when they arrived with their children only to be told that the afternoon session had been suspended.

One parent, P.D. Joan, said she even called the school at 12.30pm to check if the afternoon session had been suspended due to the haze but was told that it would proceed.

"When I arrived at 12.50pm with my daughter, a Rela guard on duty told me that there was no school. I then called the school again and was told that they had just received the directive," she said.

But unlike CGL, many schools in the state only received the directive after the afternoon sessions had started.

SK Seberang Jaya 1 pupils in Taman Siakap on the mainland were seen in their classrooms at 3.30pm.

When contacted, the clerk confirmed that the school received the directive late.

Izeham Abd Hamid, the father of a Year Four pupil, expressed disappointment over the last-minute announcement.

"Action needs to be taken early. There is no need to wait until the situation gets critical to close the school.

"Many parents are working and not everyone is available to pick up their children at the last minute. Schoolbuses also have other passengers to ferry," he said, adding that the directive should have been issued before the session started.

A canteen operator, who declined to be named, said a lot of food ended up going to waste due to the last-minute notice.

"The school informed us after 1pm, but it was too late as we had already prepared the food," she said.

A total of 95 school sessions were stopped in Penang yesterday.

The closing of schools is a reflection of what has been happening on the ground daily in the last few months since the haze took over the Malaysian sky.

Many schools in other states, including Selangor, the Federal Territories, Negri Sembilan, Sabah and Sarawak, have been closed since Monday.

In those four days, parents and teachers have not been getting proper updates and have to painstakingly check many avenues to see if the schools are going to be open or closed the next day.

The daily routine then continues with them making arrangements for babysitters, cancelling transports or applying for emergency leave.

In Kuala Muda and Yan, Kedah, many parents were unaware that schools in the two districts were closed due to the haze.

In Johor, teachers handling the Sijil Peperiksaan Malaysia (SPM) subjects are complaining about having to race against time to make sure their students are well-prepared to sit for the exam early next month.