Two killed as plane crashes into a house 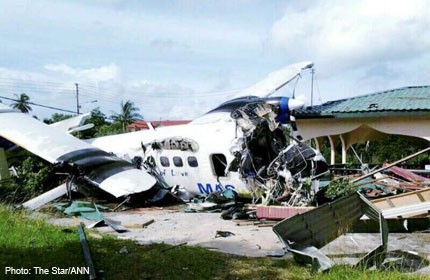 KOTA KINABALU - Two people were killed and five others injured when a MASwings Twin Otter went off course as it approached the runway and crashed into a house in Kudat.

Co-pilot Marc Joel Bansh suffered multiple fractures and head injuries and was airlifted by helicopter to the Queen Elizabeth Hospital in Kota Kinabalu. However, the 23-year-old died on arrival at the hospital.

The Twin Otter with 16 people on board was making a landing in Sabah's northern Kudat when the pilot apparently lost control of the plane due to strong winds that forced it to plunge into the garage of a house at Kg Sinsan near the airport.

"The family of seven in the house escaped unhurt," said Kudat Fire and Rescue Department officer Jasri Ab Jal, whose team freed all 16 people as waiting medics rushed them to the Kudat hospital following the crash at 2.55pm yesterday.

The 58-year-old pilot, Wan Ahmad Abdul Amir, who suffered head injuries, and three others were sent by road to the hospital here.

Ten other passengers, including a one-year-old baby girl and a four-year-old boy, were given outpatient treatment.

MH3002 had left Kota Kinabalu airport at around 2.05pm for the 40-minute flight to the northern district and is believed to have been hit by crosswinds while making the landing on the 900m landing strip, known as a Short Take Off and Landing Strip - STOL.

The control tower is unmanned. Pilots make their landings based on their own instrumentation. The Twin Otters are not equipped with sophisticated avionics.

Officials from the Department of Civil Aviation accident unit are expected to arrive today to begin investigations.

Some of the passengers told rescuers that they were approaching the runway in bad weather just before the plane plunged into the house.

Some claimed the plane had hit the sea near the airport before ascending again but it clipped a tree and then crash-landed.

One of the wings and the front section of the plane, including the cockpit, were badly damaged.

In a statement, Malaysia Airlines said the aircraft landed short of the Kudat runway and confirmed that 16 people were on board.

Kudat is about 170km from Kota Kinabalu and the Twin Otters serve the area twice weekly as part of MASwings' rural air service in Sabah.

The aircraft was travelling on full passenger load and the seaside Kudat town often gets strong winds from the South China Sea.