Typecasting question comes as no surprise to many 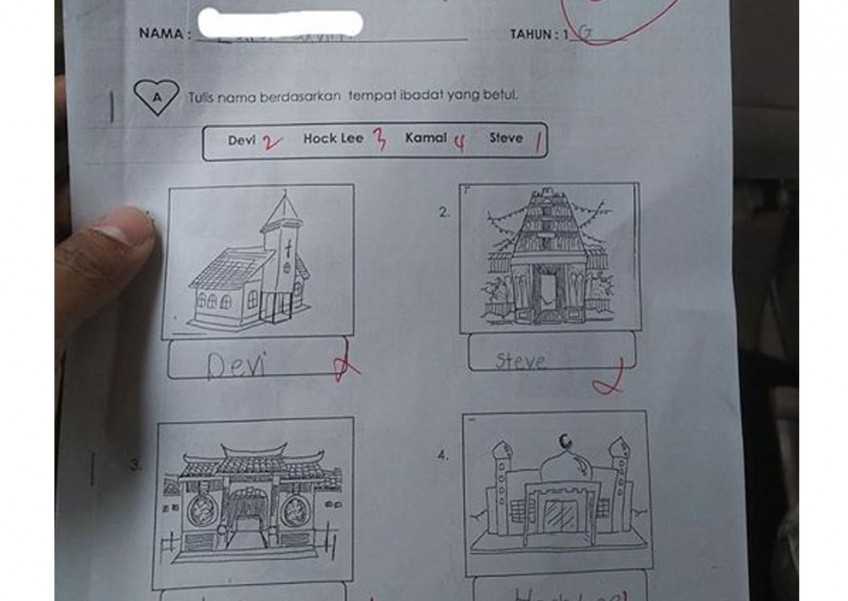 PETALING JAYA: Parents are outraged but not surprised by the racial and religious stereotyping found in a Moral Studies test for Year One students.

The question asked the pupils to match four names - Devi, Hock Lee, Kamal and Steve - to four places of worship, namely a church, a Hindu temple, a Chinese temple and a mosque.

The issue became viral following what appeared to be an instance of ethnic and/or religious stereotyping found in a Year One Moral Studies exam paper. The paper from a national school here went viral after actress Sarah Lian posted it on her Facebook page on Tuesday.

Dr Ho Sook Wah, a mother of two, was among those who were not surprised.

"My daughter had such silly moral questions when she was in Year One," she said.

"She had a question showing four different religious buildings and was asked to match the race to the religion: mosque-Malays, Hindu temple-Indians, and Buddhist temple-Chinese.

"For a church, she had a problem writing a race so she wrote 'semua orang' (everyone) and was marked wrong. To me, the answer should be semua orang for each image," said Dr Ho, a former schoolteacher and university lecturer.

Dr Ho and her husband coached her then seven-year-old daughter to raise the issue with her teacher.

"The teacher agreed with the rationale but said the marking scheme had to be followed," said Dr Ho, whose daughter is now in Year Six at a school in Kuala Lumpur.

The seven-year-old daughter of Arvinthan Rengaraju, who is Lian's friend, matched Devi to the church, Steve to the Hindu temple, Kamal to the Chinese temple, and Hock Lee to the mosque, resulting in all answers marked as "wrong".

Arvinthan said the message a child would learn from this is that it is wrong to think that "Devi" can be a Christian, and so on.

"My daughter Zara is half Chinese, and she goes to church. That's the Malaysia of today, so I think it's time our education system reflects social changes," he said.

Referring to Lian's posting, Arvinthan explained that it had been taken out of context as it was never his intention to rant about racism or stereotyping.

The father was also quick to defend Zara's school and its teachers, and added that the teacher who set the exam paper had no ill intent while preparing the question.

"But the fact that a lot of netizens took offence to the question probably means there is much we can do to address the teaching of race and religion in schools," he added.

On Wednesday, actress Sarah Lian posted a photograph of the Year One question paper that has since gone viral.

A seven-year-old girl, the daughter of Lian's friend, had matched Devi to the church, Steve to the Hindu temple, Kamal to the Chinese temple, and Hock Lee to the mosque. All four answers were marked wrong.

Lian described the question as "archaic and racist". She said it indoctrinated young children to typecast people based on name and religion.

Read also: Couple with Down Syndrome celebrates 22 years of marriage