The ugly side to the beautiful game 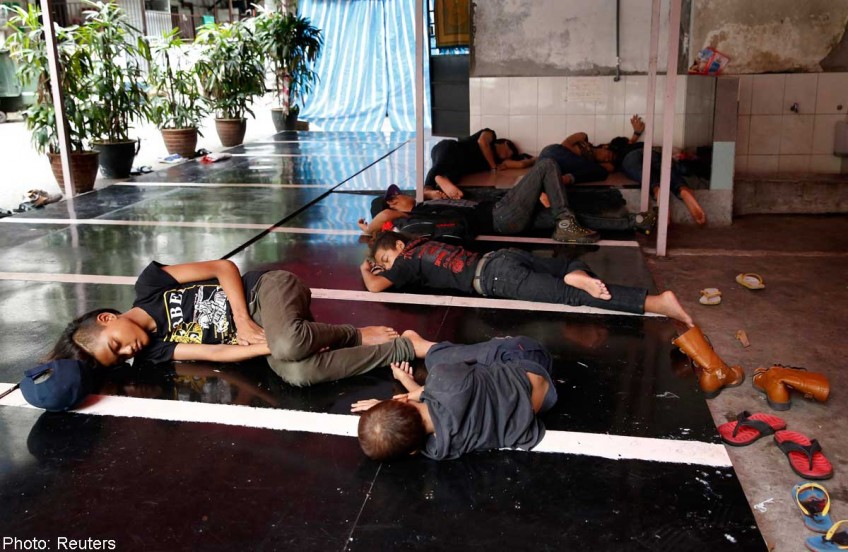 People sleep in a temporary shelter, built within the compounds of a mosque, after watching a live broadcast of the 2014 World Cup final soccer match in Kuala Lumpur July 14, 2014.

The sleepless nights are finally over. Germany has won the World Cup and made history as the first-ever European team to win the trophy in South America.

Mario Goetze's brilliant strike in extra time ended Argentina's dream of winning the cup for the third time and crushed Lionel Messi's hopes of matching the stature of Diego Maradona. The Germans have now won four World Cups, only one less than Brazil, which they famously thrashed 7-1 in the semi-finals.

What a dramatic month it has been with so many upsets, some spectacular goals and heart-stopping penalty shootouts. A record total of 171 goals were scored with Germany netting the most with 18 and hosts Brazil letting in the most with 14.

Among the noteworthy events that did not get due attention was the only hattrick, scored by Switzerland's Xherdan Shaqiri against Honduras. It was also the first ever entirely left-footed hattrick in a World Cup match. But it is a safe bet that the outrageous bite-trick by Barcelona-bound Uruguayan Luis Suarez on Italian Giorgio Chiellini would be among the most remembered moments of this World Cup.

One salient outcome of the finals was the shocking early elimination of the mighty 2010 champion, Spain, who were thrashed 5-1 by Holland.

Italy, champions of 2006, and perpetual hopefuls England, who only won the trophy once 48 years ago, could not even make it to the round of 16 while surprise package Costa Rica knocked out top-ranked Italy, England and Greece, and even beat Uruguay.

Colombia, which lost to Brazil in the quarter-finals in a match marred by defender Zuniga ploughing into the back of Brazilian star Neymar, won the Fair Play trophy in addition to securing the fifth spot.

The team known for its goal celebration dances showcased the star of this year's finals - Golden Boot winner James Rodriguez. He scored six goals, including that stunning volley against Uruguay while goalkeeper Faryd Mondragon Aly, 43, was the oldest to play in a World Cup.

Football fans throughout the world also set records on cyberspace. The final between Germany and Argentina chalked up a new Twitter record of 618,725 tweets per minute. It was even bigger on Facebook, with 88 million people around the world engaged in 280 million interactions.

And for the first time, Malaysia also made the news on the World Cup. Yes, for the wrong reason yet again, no thanks to an ignoramus of a politician.

In spite of being hit by a torrent of condemnation, he appeared to be unperturbed, even saying: "I'm a world star now. Problem?"

But Bung Mokhtar only apologised a day later, after being forced to do so by Datuk Seri Najib Tun Razak.

The Prime Minister had to do more damage control by sending out two more tweets, the first stating that the MP's comments were unacceptable and wrong and that he would withdraw them and another saying: "He does not speak for Malaysia, or for ordinary Malaysians, who understand Europe's tragic past, and respect its modern unity."

But leaving Bung Mokhtar's idiocy aside, it is a fact that Neo-Nazis and racists are rife in football, in spite of FIFA's much touted "Say No to Racism" slogan.

During the Germany versus Ghana match, one shirtless man ran into the pitch during the second half, displaying the Nazi paramilitary unit's SS symbol and the letters "HH", representing "Heil Hitler".

In the stands, there were some German fans with faces painted black and wearing afro wigs. It prompted tweets like this one: "How does Germany pay homage to Ghana? By being racist in blackface of course!"

Article 3 of FIFA's statutes states: "Discrimination of any kind against a country, private person or group of people on account of race, skin colour, ethnic, national or social origin, gender, language, religion, political opinion or any other opinion, wealth, birth or any other status, sexual orientation or any other reason is strictly prohibited and punishable by suspension or expulsion."

But the reality is that anti-Semitism and racism, especially against black players, both in Europe as well as South America, is on the rise, along with homophobia.

During the game against Brazil, Croatian fans had a banner with the coat of arms of the World War II Ustase regime, a close ally of Nazi Germany. The regime reportedly killed hundreds of thousands of Serbs, Jews, anti-fascist Croatians, Roma and others in concentration camps.

In May, the Court of Arbitration for Sports upheld a 10-match ban against Australia-born Croatia defender Josip Simunic, 36, for chanting pro-Nazi slogans, cutting him off from the country's World Cup team.

It unanimously rejected his appeal against the ban imposed by FIFA, five months earlier.

He said there was a "disconnect" between FIFA's declared aim of stamping out discrimination and its failure to use trained staff to investigate cases. Webb has warned that it would be much more of a problem for the 2018 World Cup in Russia.

During the Russia versus South Korea game, banners with a variation of the Celtic Cross likened to Neo-Nazism and white supremacy were seen among the vociferous Russian fans.

Football may be a beautiful game but it also has an increasingly growing ugly side.

[[nid:123544]]
SUBSCRIBE TO OUR NEWSLETTER
Your daily good stuff - AsiaOne stories delivered straight to your inbox