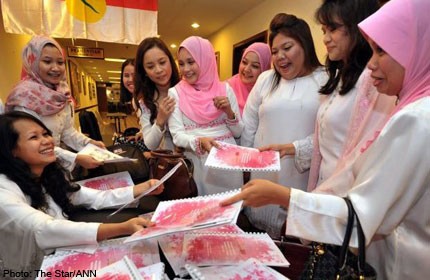 PETALING JAYA - Almost similar ballot papers for national and divisional posts may have led to many spoilt votes and "unintended" choice of candidates for Umno's three wings.

These are among the teething problems that surfaced when the party's new voting system was put to the test as some 220,000 members from the Youth, Wanita and Puteri wings cast their votes yesterday.

Other complaints include "missing names" in the candidates' booklet, shortage of ballot papers and delay.

Former Baling Wanita Umno chief Siti Aisyah Abdul Rahman said many delegates were unable to differentiate the ballot papers because their colours and designs were almost the same as the national ones.

"And many delegates find the simultaneous national and divisional contests confusing," she said.

Akhramsyah Sanusi, an Umno Youth chief contestant, said the voting process in Langkawi had to be stopped half-way when the election committee members realised that many delegates were "utterly confused", and marked the candidates' numbers on the wrong ballot papers.

"There was an additional briefing session before voting was resumed," said the Umno Bendang Baru branch chief.

Among those who complained about the missing names were Mohamad Nazmi Abdul Razak from Negri Sembilan, Affendy Harun from Perak, and Siti Balkish Ahmad from Kedah.

Siti Balkish was supposed to be in a straight fight with Umi Kalsom Abd Mutalib for the Langkawi Puteri Umno division chief's post, but her name "disappeared" from the candidates' booklet that was given to the delegates.

Mohamad Nazmi, who is vying for the Kuala Pilah Umno Youth division executive committee's post, said his name should have been printed because he was not notified of anything that disqualified him from taking part in the election.

Some divisions in Malacca faced a shortage of ballot papers.

The division had 415 delegates, but only received 400 ballot papers from the headquarters.

The division only had 15 candidates, but it received ballot papers for 20 candidates.