The party then decided to withdraw its support for Dr Mahathir as prime minister when he instead proposed a unity government for all political parties, he said.

Ahmad Zahid took to Facebook to explain the context of the viral picture which showed Dr Mahathir seated with Perikatan Nasional leaders in a meeting that allegedly took place on Feb 23.

"The picture that is going viral showed a meeting between the respective party presidents to propose that Dr Mahathir set up a government without DAP, PKR and Parti Amanah Negara.

"That was the common point of agreement for us to start our discussions.

"However, we withdrew our support when Dr Mahathir later suggested for the formation of a unity government comprising all parties, which went against our earlier agreement, " he said in his post yesterday.

The individual who uploaded the viral picture claimed that all the prominent Malay leaders were present and that Dr Mahathir had wanted them to unite once again. 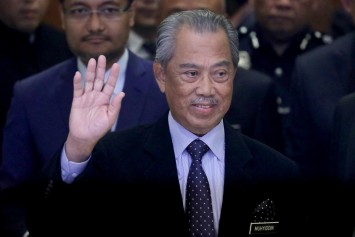 Ahmad Zahid also debunked talk that he was showing court documents to Dr Mahathir, which some people have claimed that he had done so in order to prove his innocence.

"I attended the meeting bringing statutory declarations and not court documents as claimed by some people.

"I attended the meeting with the mandate of the members and leadership of Umno and no more than that, " Ahmad Zahid said.

The week-long crisis that month saw Dr Mahathir's resignation as prime minister and Bersatu chairman, as well as the collapse of the Pakatan administration, which was replaced by Perikatan.