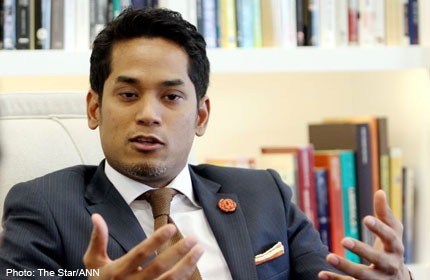 PETALING JAYA - Umno Youth chief Khairy Jamaluddin is undaunted by a threat to report alleged power abuse by him to the Malaysian Anti-Corruption Commission (MACC).

"The allegations are baseless," he said in response to rival Syed Rosli Syed Harman Jamalullail who said he would lodge a report with the MACC over Khairy's alleged misuse of his Cabinet position and public machinery in campaigning for the elections.

Syed Rosli, a Pandan Umno leader who is challenging Khairy for the Youth top post with three others -Akhramsyah Sanusi, Mohd Karim Ali and Irwan Ambak Khalid Izhar - lodged a similar complaint with the Umno disciplinary committee earlier this week.

"This is nothing unusual to me. I have been through this before and I have come through it. I am not deterred by the smear campaign.

"If there are reports made, I am quite happy to answer the allegations to whoever, (be it the) disciplinary committee or the MACC.

"Instead of trying to lay out an alternative vision, which the people contesting against me should be doing, they have resorted to making unfounded allegations. This speaks volumes about the inadequacies of their own campaign," Khairy said after a dialogue with National Youth Skills Institute (IKBN) alumni here yesterday.

Meanwhile, in an earlier interview, Khairy described the revival of his political fortunes as a "second chance" and said he did not want to squander it.

"I have spent the last four years trying to rehabilitate my political career and not many people get second chances. And, nobody gets a third chance," he said.

The 37-year-old won the Youth top post in 2009 by defeating Datuk Mukhriz Tun Mahathir and Datuk Seri Dr Mohd Khir Toyo, and most observers believe Khairy has a comfortable lead going into the polls tomorrow.

During his tenure as Youth chief, Khairy earned a reputation for being unafraid to take on the Opposition in speaking his mind on issues, including the "new politics" in Umno.

Khairy has earned the respect of many in the movement, including his detractors for his many ideas, which include the popular Barisan Nasional Youth job fairs and outreach activities for youths.

All these are a marked difference from the scenario four years ago when he was seen by many as an ambitious upstart "too eager to move up the hierarchy" .

Khairy admitted his political journey has not been easy.

"At many points, in the last four years, I thought of just calling it quits but I persevered because I told myself - give it one last shot and see what happens."