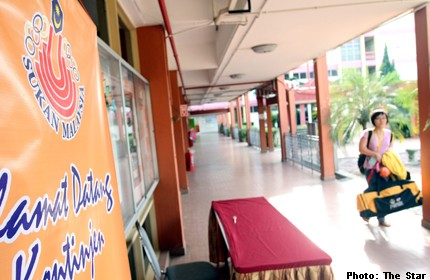 KUALA LUMPUR - The alleged gang rape of a female official by three handball players has rocked Malaysia's sports community, as officials on Wednesday demanded tough punishment for the perpetrators and higher security for female athletes.

Mr Sieh Koh Chi, secretary-general of the Olympic Council of Malaysia, told Agence France-Presse he was "shocked" by the incident on July 3 at the Malaysia Games, a competition between the country's different states. "Swift investigations must be carried out," he said.

Mr Zolkples Embong, national sports council director-general, was quoted by Bernama news agency as saying the 19-year-old woman was semi-conscious when she was allegedly raped repeatedly at the games village.

She had been acting as a communications liaison officer for the Federal Territories girls' handball team.

Three male handball players, aged between 18 and 19, were arrested last Friday to help in the inquiry.

Serdang deputy superintendent Lam Chin Fei said that the men had been remanded until Thursday.

The Star newspaper reported on Tuesday that before the alleged rape, the young woman had left the games village to have alcoholic drinks with several handball players.

She claimed that she was pinned down on a bed in a dormitory at the games village at about 4am and gang-raped.

Mr Peter Velappan, former Asian Football Confederation general secretary, said that the "outrageous" incident was the first of its kind in Malaysian sports and had tarnished the country's reputation.

Newly minted Youth and Sports Minister Khairy Jamaluddin said that he is determined to see tighter security protocol in place for future editions of the games, which ended on Sunday.

"I take the rape allegation extremely seriously and I take the safety of athletes very seriously, especially our female athletes.

"We will be in discussions with state sports councils and hope to present the revised security protocol before the next Sukma in Perlis," he said on Tuesday.

The games, also known as Sukma, is for athletes under the age of 21.

This year's competition served as the basis of selection for the Malaysian contingent to the Myanmar South-east Asia Games in December.

Meanwhile, Penang Chief Minister Lim Guan Eng said there have been complaints of lax security in the grounds of the female hostel despite assurances by ministry officers and games organisers that security was adequate.

The Star newspaper quoted an unnamed female athlete as saying that no security guard was stationed near her dormitory block and even the guard house was far away.

"It was relatively easy for the public to enter the premises. While I was there, I did not see any security guards making their rounds during the day or night," she said.