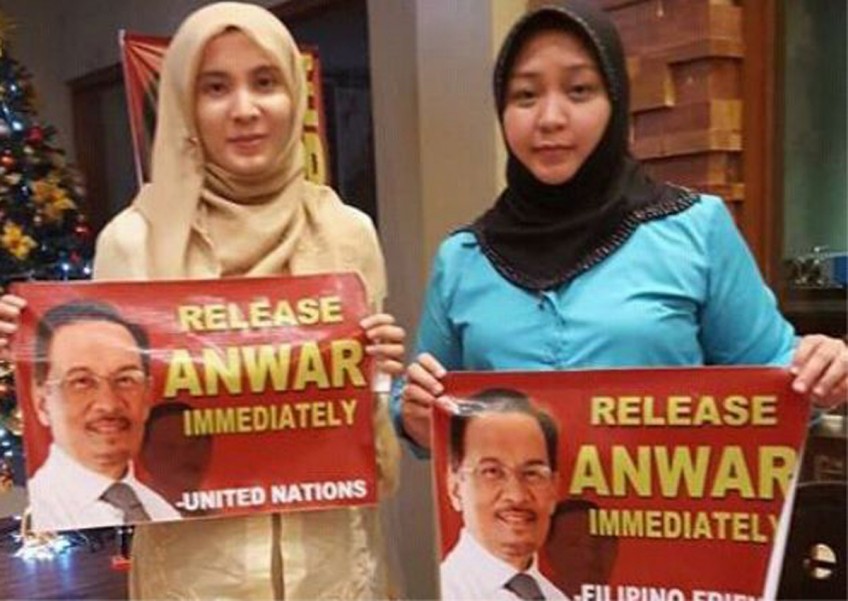 PETALING JAYA - Pictures of Lembah Pantai MP Nurul Izzah Anwar together with the daughter of the former self-styled Sulu Sultan who ordered the Lahad Datu intrusion are causing an uproar on social media.

Many are questioning why Nurul had met with Jacel Kiram, whose father Jamalul Kiram III sent 200 of his 'Royal Sulu Army' to invade Sabah in Feb 2013.

In one picture, Nurul was seen having dinner with Jacel and an unidentified man while in two other pictures, Nurul poses with Jacel holding a 'Release Anwar Immediately' poster.

The pictures are believed to have been taken this month.

Facebook user Lim Sian See asked what Nurul, Jacel and the unidentified person discussed over dinner and whether the food was any good.

The self-styled Sulu princess was the chief spokesperson during the Lahad Datu invasion and is currently running for Senator on the platform of claiming Sabah from Malaysia.

On her Facebook page, Jacel's profile photo had the caption "You are a Filipino, Sabah is ours!"

Netizens also shared the pictures and questioned Nurul's meeting with Jacel by asking, 'what was she doing with person behind the Lahad Datu intrusion'.

Another user Justin 'The' Tun urged Nurul to clear the air and even went to say, "Isn't that woman Jacel Kiran? Pls tell me she's not."

Both Nurul and Jacel could not be reached for comment at time of writing.

On Feb 2013, an armed group of 200 men known as the 'Royal Army of Sulu Sultanate', from Southern Philippines entered Malaysian waters.

A standoff with Malaysian security enforces ensued, causing casualties on both sides.