Victim of brutal gang attack gets mysterious calls in Penang 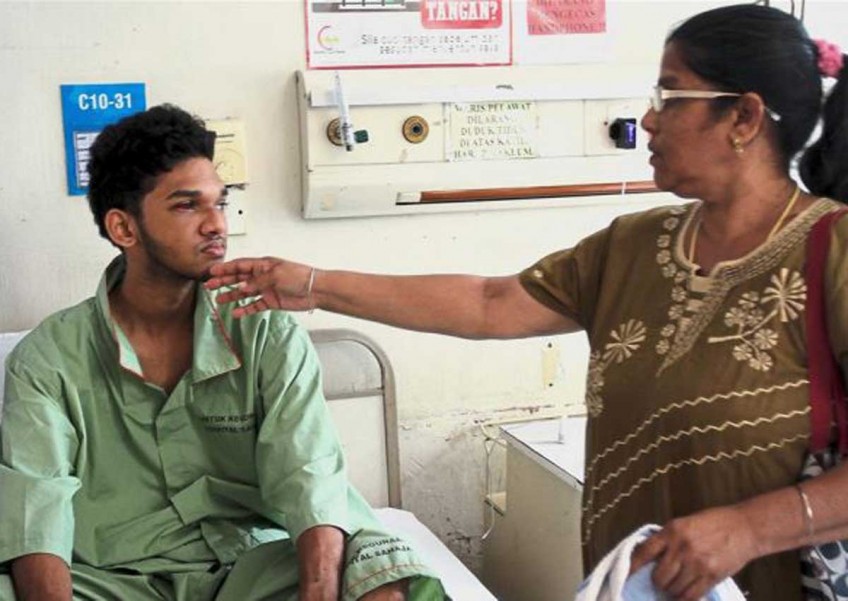 Painful encounter: Previin’s aunt K. Kalyani, 59, attending to him at the Penang Hospital where he has been warded since the attack on Sunday.
The Nation/Asia News Network

GEORGE TOWN - T. Previin's (pic) family is worried for his safety after he received several suspicious calls following a gang attack which left him injured and his best friend T. Nhaveen in a coma.

Family members and friends are considering making police reports over the matter.

"We feel threatened," he said when met at the hospital yesterday.

R.K. Asokan, a close friend of Previin's father, said they feared the people who called might have bad intentions.

"They might be using 'offering help' as a way to get nearer to the boys. We do not know whether they are sincere in helping," he said.

Previin said he received three calls after the incident, and the latest was yesterday morning.

"The callers claimed they are from Kuala Lumpur, and wanted to help Nhaveen with donations.

"I don't know them, and couldn't recognise their voice or numbers," said Previin at his hospital bed yesterday.

Previin's aunt, who declined to be named, said she also received a call in Tamil from a man yesterday, claiming to offer help.

"I am not sure if the calls we received were from the same people," she said.

Previin and Nhaveen, 18, were beaten up with helmets by a group of teenagers.

Previin managed to escape, but Nhaveen was later found unconscious in a field in Jalan Kaki Bukit, Bukit Gelugor here, after the assault.

Nhaveen, who had injuries in his anus and burn marks on his back, also had internal bleeding in his head and abdomen. He was taken to Penang Hospital.

Five suspects, aged between 16 and 18, have been arrested over the attack.

Previin, who is scheduled to undergo surgery today for a fractured bone under his right eye, said he was still in pain.

"Luckily, my vision is not affected," he said.

Previin said he was not familiar with the suspects but he knew their names.

"I can recognise them but we were not close. Just 'hi' and 'bye' friends. But until now, none of the family members of the suspects have approached me to apologise," he said.

Previin said he visited Nhaveen whenever he could at the hospital.

"The last time I went to the intensive care unit to see Nhaveen was on Tuesday.

"I didn't say anything to him, but I said a silent prayer, hoping he will recover soon.

"I am really worried about his condition," he said.

"We are also looking at seeking a second opinion.

"We need him to tell us what had happened after he was taken away by the attackers," she said.

She said Nhaveen's mother, D. Shanti, 43, has been trying hard to cope with the situation since Sunday.

"She is traumatised and very emotional. She needs time to recover," she added.

"Both of them will give assistance to the family and ensure justice is done," Lim told a press conference in Komtar.

Ramkarpal has requested a medical report from Penang Hospital director Datuk Dr Norsidah Ismail for the family to seek a second opinion on Nhaveen's condition.