Victim's family: Man who drove body to police station not her boyfriend

PETALING JAYA - The man who claimed he murdered his "lover" and drove her body to the Damansara police station to surrender is not known to the woman's family.

No one from 37-year-old D. Tharsini's family has even heard of the man until he admitted to killing her to police, said relatives who showed up at the Universiti Malaya Medical Centre Pathology Department to identify the body on Monday (Feb 5).

"We have never even heard of him. As far as we know, she was not seeing anyone," said the victim's cousin, who wished to be known only as Malar. 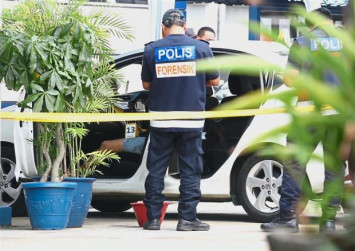 The sudden murder and the revelation that the killer was her boyfriend has Tharsini's family speculating that this was a case of unrequited love gone horribly wrong.

Another family member said that the victim barely went out except for work as she loved staying at home with her four dogs.

"Apparently, the man was her co-worker in her office. Maybe it was a one-sided relationship," claimed the relative.

"It was surreal. He walked in, there was no blood on him. He just told the police officer that he had murdered his girlfriend and that her body was in the car," said the witness.