Waiter in Malaysia slapped for asking customer to stop smoking

SHAH ALAM, Malaysia - A mamak restaurant waiter who politely told a group of three men to stop smoking in the eatery got a rude shock when he was slapped and scolded.

Mr M. Selvam, 25, from India, was merely doing his job in reminding customers of the newly imposed smoking ban when one of the customers slapped him.

"It was around 12.30pm on the first day of the ban on Jan 1. We had placed 'no smoking' signs but some customers were still smoking.

"I went over to a group of three men who were smoking. I politely told them to stop smoking but one of them got up and suddenly slapped me. I was shocked. They then left," he said when met at the restaurant in Seksyen 25 in Shah Alam on Thursday (Jan 3).

That was not the only rude encounter. Later that day, Mr Selvam was scolded by another customer for the same reason.

"I don't know why people can't just follow the rules instead of behaving like this," he said.

Mr Selvam's employer has since lodged a police report over the slapping incident.

Smoking in all restaurants, coffeeshops and hawker centres - even open-air eateries - nationwide is banned in Malaysia starting from Jan 1, 2019. 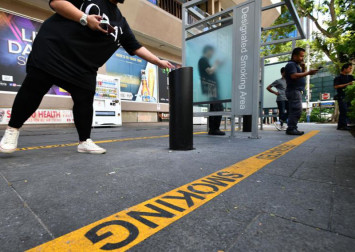 "We urge the person involved to come forward and give his statement," he said.

Meanwhile, a check with several other mamak restaurants in the area revealed a more well-behaved customer base.

Mr Md Ariff, 34, a Bangladeshi staff at a restaurant in Kota Kemuning said most customers quietly stepped outside to smoke when reminded of the new ban.

"It is still new, so sometimes they forget. We remind them and there is no problem," he said.

Mr Khalil, 40, from a restaurant in Taman Sri Muda, Shah Alam, said he had some unhappy stares from one or two customers but everyone complied with the new ruling.

Several restaurant associations said generally, customers have been understanding of the ban, save for a stubborn small group of people.

"We have customers who are a bit stubborn and reply rudely to workers, but we told our workers to just ignore them," said Malaysia Singapore Coffee Shop Proprietors' General Association president Datuk Ho Su Mong.

"Most of the customers are conscious of the new ruling and walk away to the roadside to smoke," he added, saying that business had been affected by the new ruling.

Malaysian Indian Muslim Chamber of Commerce and Industry president Datuk Jamarulkhan Kadir said they had yet to receive any reports of aggressive customers.