Anwar claimed that Yang di-Pertuan Agong Sultan Muhammad V had first suggested for his wife and PKR president to be the prime minister as the party had garnered the most seats in GE14.

However, he said Dr Wan Azizah refused the offer, as the deal in Pakatan was to make its chairman Dr Mahathir as the Prime Minister.

"The Yang di-Pertuan Agong said that it is seldom that we see politicians hold on to their promises. But Dr Wan Azizah asked for one thing, she asked for her husband to be released immediately. The King said he will do it as fast as possible," Anwar said in his first speech at Padang Timur here on Wednesday (May 16) night after his royal pardon.

The 70-year-old PKR leader had walked out of the Cheras Rehabilitation Hospital at 11.30am on Wednesday and headed straight to the Istana Negara for an audience with the Yang di-Pertuan Agong, who granted a full pardon and cleared him of his 2014 sodomy conviction.

Anwar was initially scheduled to be released on June 8 this year after his five-year sentence that started on Feb 10, 2015, was reduced for good behaviour.

In his speech, Anwar also thanked Dr Mahathir for expediting the process of his pardon.

He also took a swipe at the Election Commission (EC) in his speech, claiming that the Commission had failed to furnish GE14 results to the King in a timely manner.

Read Also
Anwar: I will not seek an immediate return to politics 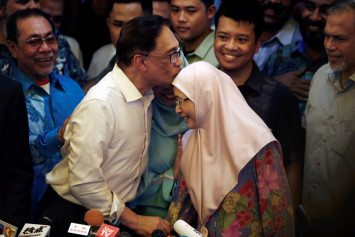 "I promised that I will pass down this message to the people so the public won't be 'cheated' by the EC - that as if it has done its work," said Anwar.

Anwar's first sodomy charge was in 1998, when he was the deputy prime minister and protege to the then-prime minister Dr Mahathir.

Following the charge, Dr Mahathir sacked Anwar from Cabinet and it then triggered the formation of PKR and the reformasi movement.

He was found guilty and sentenced to jail in 1999, but was released in 2004 after his sodomy verdict was overturned.