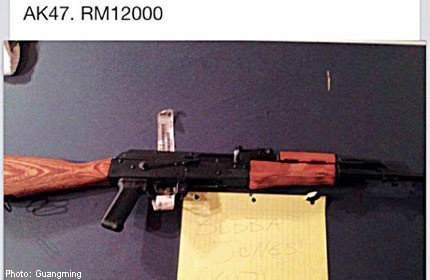 That age-old image of an illegal gun seller hiding his wares inside his trench coat has now been replaced by a more modern version in Malaysia - a Facebook page.

Called Malaysia Gun Shop, the page was set up on Sunday under the account name "Irwan". It says the guns and offers are genuine, reported China Press.

Also available were cheaper pistols for RM4,000. On the page, Irwan said he will sell guns to only good people and that the weapons are not intended for criminal purposes.

He said he will be asking for identity cards and handphone numbers to ensure the guns do not fall into the wrong hands, reported China Press.

But his Facebook page has drawn the ire of the authorities and has suddenly gone offline.

Kuala Lumpur CID chief Ku Chin Wah said police have started an investigation after being alerted to the page by Facebook users, reported The Malay Mail.

"We initiated an investigation to track the person who created the page as soon as (we) were alerted to it."

He said it did not matter if the page owner actually had weapons.

"We are working with the cyber crime department and other authorities to track him down," he added.

Many who visited the page were upset with what they saw, with some saying they would report the matter to the police.

Meanwhile, a 26-year-old lorry driver was shot dead by a pillion rider on a passing motorcycle in Selangor.

Mr S. Sambhath was standing outside a bank with his friends on Thursday when he was hit at around 2.20am.

He died on the way to hospital.

North Klang deputy police chief Jani Ahmad said the victim was hit twice - once in the face and the other in the chest, reported The Star.

He said the motive of the shooting was not known.

Bystanders said the shooter and the motorcycle rider were dressed in black jackets and wore black helmets with tinted visors.

Mr P. Theeban, who was with the victim when the shooting took place, said they had just withdrawn money from a bank.

"We could not see the attackers. All we did was run when they started shooting at us," he said.