PETALING JAYA - It was not only a union between the scions of two business empires but also a marriage of two cultures.

Brother to the groom SM Nasarudin SM Nasimuddin, who is Naza joint group executive chairman, shared photos of the "gate-crashing" games when the groom and his band of brothers (Heng Dai or best men) picked up the bride at The Chateau in Bukit Tinggi, Bentong.

Traditionally during Chinese weddings, the bride's maids of honour set up a series of challenges for the groom and his Heng Dai to accomplish before they are allowed to take the bride to the groom's tea ceremony.

"The most hardcore Heng Dai crew to ensure Faliq secured his bride," SM Nasaruddin, who was among the 10 groomsmen, said in his Instagram post on Saturday (Feb 3). 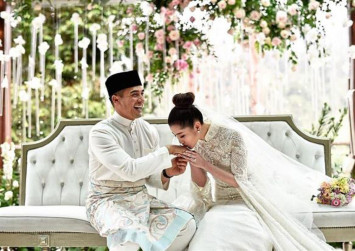 They arrived at the bride's venue in a Mercedes-Benz G63 AMG holding red Chinese fans and were photographed laughing as they played gate-crashing games, one of which required them to pass apples among each other using only their mouths.

"We didn't say no to any challenge that was presented to us by the Ji Mui (bridesmaids)," SM Nasaruddin said, adding that they saved lots on the ang pow (red packets containing money).

The heirs of business empires Naza Group and Berjaya Group tied the knot in an intimate ceremony on Friday (Feb 2).

They were said to be friends when studying at an international school and reportedly got engaged on July 2 last year when the 33-year-old Faliq proposed to Tan, 30, while they were on vacation in Marrakesh, Morocco.

The wedding photos uploaded by Faliq's younger sister Nadia Nasimmudin on her Instagram also showed the couple being pronounced husband and wife after an akad nikah (solemnisation of marriage) ceremony with a RM1,000 (S$339) dowry.