Who is Malaysian fugitive Nicky Liow and what links him to ex-Macau triad boss 'Broken Tooth' Wan Kuok Koi?

Liow is the vice-chairman of the World Hongmen History and Culture Association, which claims tens of thousands of members worldwide and was founded by Wan after his release from prison in 2012 with the stated aim of promoting solidarity and cultural exchange among Chinese communities around the globe.

The Malaysian Anti-Corruption Commission cited suspected links with Liow as the reason for arresting two of its own officials in April – one of whom was later charged with conspiring to receive a 100,000 ringgit (S$32,000) bribe.

Liow’s current whereabouts are unknown. The 33-year-old has been accused of money laundering, involvement with scam syndicates in Macau, and commercial crime. Police in Malaysia filed an Interpol Red Notice for his arrest on organised crime charges after he reportedly evaded capture in March, fleeing the town of Puchong, 20km southwest of Kuala Lumpur, with eight bags of cash in tow.

Wan, whose business interests have spanned Cambodia, Palau and Myanmar, is also the subject of an Interpol Red Notice filed in February by Malaysian police seeking his arrest for commercial crime related to his time as non-executive chairman of Inix Technologies Holdings Berhad, from June to December last year.

Some Malaysian media outlets reported in January that Wan was believed to be hiding out in Malaysia, though his actual whereabouts remain unknown.

A video uploaded to the internet in March that was widely reported on by Malaysian and Chinese tabloids showed Wan visiting the headquarters of Liow’s company Winner Dynasty Group in 2019, with the two seen bonding over karaoke and durian.

Malaysian police did not respond to questions about the whereabouts of Liow and Wan, and on the latest action they had taken on the cases.

The founder and chairman of Winner Dynasty Group, registered in Britain in 2016 with himself and his brother Liow Wei Hoon as directors, has sought to present himself as an altruistic philanthropist who rose from humble roots.

In August last year, Liow reportedly donated 600,000 ringgit to his alma mater in Selangor and also made headlines with his multiple rounds of mask donations to hospitals, the military, schools, and media outlets amid the coronavirus pandemic .

On paper, his company is a wholesaler of coffee, tea, cocoa, and spices, but a look at its Facebook page reveals business ventures spanning e-commerce, entertainment, investment, technology and publishing, with a particular focus on a series of e-commerce apps and cryptocurrency trading platforms under the name “Yunbao”.

Malaysian and Chinese media have reported that Liow got his break in the criminal underworld through Zhang Jian, the self-proclaimed “future richest man in the world” behind one of China’s largest Ponzi schemes that swindled at least 200,000 people out of more than 160 million yuan (US$24.8 million).

Wan Kuok Koi, 65, was imprisoned in Macau for 14 years for a string of crimes, including leading the 14K triad gang’s Macau faction.

Upon his release in 2012 he founded and became chairman of the World Hongmen History and Culture Association, and in 2013 established the now-dissolved Dongmei Group which was involved in building a casino-hubbed town in Myanmar called the Saixigang zone.

World Hung Mun Investment, another of Wan’s companies, said in 2018 it had raised US$750 million (S$1 billion) in an initial coin offering for his “HB” cryptocurrency, the same year that his Hongmen Security Company was established, reportedly to protect Chinese interests in countries that are signed up to Beijing’s Belt and Road Initiative to grow global trade.

In December, the US Treasury ordered sanctions on Wan , calling him a member of the Communist Party’s Chinese People’s Political Consultative Conference who had attached his criminal operations to belt and road investments. 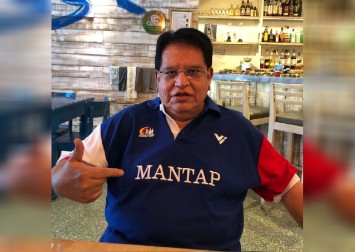 In placing sanctions on Wan’s Cambodia-based World Hongmen group and Hong Kong-based Dongmei Group, it said “the 14K Triad is utilising Broken Tooth’s World Hongmen History and Culture Association as an effort to legitimise itself”.

A report by Washington-based non-profit organisation C4ADS in June said Wan’s Hongmen Security Company had invested in the Shwe Kokko special economic zone in Myanmar – a development the Chinese embassy in the country said in a statement in August last year “has nothing to do with the Belt and Road Initiative”.

In Malaysia, Wan is wanted on charges relating to his six-month tenure last year as non-executive chairman of Inix Technologies Holdings Berhad, during which authorities suspect some 6 million ringgit (US$1.43 million) in stock manipulation and fraud took place when he failed to transfer publicly listed shares of the company to a third party.

Liow received the Darjah Sri Sultan Ahmad Shah Pahang award from Pahang Palace in 2015, according to reports in Malaysian media, allowing him to use the prestigious title of “Datuk Seri”.

A high-profile assault case in 2017 that resulted in Liow’s arrest – then rearrest on drugs charges after testing positive for narcotics – brought his title to the public’s attention after featuring in news reports, with many questioning how a young entrepreneur with a criminal record who could often be seen flaunting his wealth and accolades on social media came to be awarded the Datuk Seri title.

At the time, police mentioned Liow’s involvement in an earlier drugs case, which was one of as many as 12 drugs and assault charges to his name, Inspector General Tan Sri Abdul Hamid Bador told reporters earlier this year.

The Pahang Palace revoked Liow and his brother’s titles in April this year, following the police raid and issuance of an Interpol Red Notice.

Despite causing a stir with his drugs and assault charges, Liow managed to mostly keep off the police’s radar until inquiries into the sale of a mobile phone worth 1,500 ringgit triggered a full-blown investigation that eventually led back to his Puchong-based syndicate.

A number of law enforcement officers and other officials had colluded with Liow, the investigation revealed, with one former deputy public prosecutor even acting as his “fixer” – providing information that allowed him to evade capture.

The target of multiple attempts at his capture by the authorities, Liow was last seen in March at a nightclub in Puchong.

An eight-day police operation in the area led to the arrest of 68 people linked to him, including two holding the title of Datuk Seri and six of Datuk. Liow, meanwhile, escaped with as much cash as he could carry.

In April, 10 policemen were arrested alongside the two MACC officials for having links to Liow, in what became known as Operation Pelican 3.0, with some 34 law enforcement personnel suspected of ties to Liow’s syndicate in all.